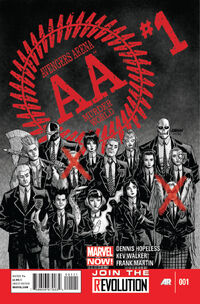 Avengers Arena was a battle royale event arranged by the supervillain Arcade in his custom made Murderworld. He kidnapped young heroes from across the globe and forced the competitors to fight to the death or be killed themselves.

16 super powered teens were taken by Arcade to Murderworld to fight each other to the death. Arcade seems to have sufficient technology to physically capture and hold all 16 of them. After releasing them from stasis, some of the teens attacked Arcade but to no avail. The teens stopped when it appears that Arcade can't be defeated. Arcade instructs the teens that if they want to survive they will have to kill for it. Arcade then decided to kill Hazmat who continues to openly defy Arcade. But Mettle, who is also Hazmat's boyfriend, sacrificed himself instead and was killed by Arcade.[1]


Retrieved from "https://marvel.fandom.com/wiki/Avengers_Arena_(Event)?oldid=4869562"
Community content is available under CC-BY-SA unless otherwise noted.