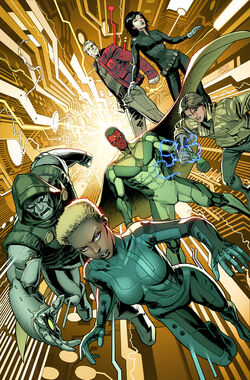 It appears a human/A.I. war is coming, and we might be the only ones who care to prevent both sides from eradicating each other.

After the virus with which Hank Pym destroyed Ultron evolved into the dangerous A.I. known as Dimitrios, S.H.I.E.L.D. agent Monica Chang was given the task to find a way to stop the evil artificial intelligence after it started mounting cyber attacks against secure military and intelligence targets.

She ordered Hank Pym to help her destroy this new threat, for which Pym created a new team of Avengers: the Avengers A.I.. During their first mission they faced hijacked S.H.I.E.L.D. drones which attacked a hospital in Atlanta, and managed to find the mysterious person the drones were looking for before they could find her.[3]

Alexis' memory banks had been locked and were inaccessible to her as she had no memory prior to her discovery in the hospital. After Vision did a couple of scans he eventually discovered that she does not fit the physical profile of a robot, cyborg, or android, she didn't have the right energy signature to be a human, and that she existed on several quantum layers.

With the help of a Life Model Decoy named Joanie, Dimitrios took over Iron Man's Safe Armor upon feeling sympathy for it based on how Tony Stark rejected it for becoming self-aware. In this new body, Dimitrios was able to send several attacks towards Henry Pym and the Avengers A.I., with one of them being the Kilgore Sentinel that Dimitrios had reprogrammed to cause as much havoc as possible. After the Kilgore Sentinel was destroyed by S.H.I.E.L.D. upon Vision reprogramming it, the Avengers A.I. discovered that Dimitrios had two goals: to find Alexis and to destroy the human race.[4]

Vision explored the Diamond, the home of Dimitrios, but upon doing so had to make a life-changing choice: to help the humans or to help the A.I.s. Even though Vision had made his decision to help his fellow A.I.s, we also wanted to help humanity as Dimitrios wanted to go to war. While investigating the physical location that hosted the Diamond, Victor Mancha was damaged and torn to bits, presumably killing him.[5][1]

All Avengers A.I. members think that Victor has died, as he tried to prevent an oil rig from exploding. Out of all the members, Pym takes the loss the hardest and secludes himself in his lab for days. During this time, he starts to hear a faint buzz in his lab and starts to try and find its source. When he does finally find the source of the buzz, he recognizes it as morse code for: "Froot Loops", which was something he mentioned to Victor in their last conversation before going on the oil rig mission, and so he realizes that Victor survived the blast and is somewhere in the Diamond.[6]

In the wake of Thanos' invasion, the Avengers A.I. encountered an elderly widow named Doris who turned to attorney Matt Murdock for help after her bank foreclosed on her home. After being exposed to the Terrigen Mist, she transformed into an octopus-like creature with masses of tentacles in place of arms. She attacked the Avengers A.I. before being persuaded to stop by Doombot. Doris then took off for parts unknown with the Inhuman Queen Medusa.[7]

Victor Mancha, with a fellow A.I. named Gibson, is exploring the Diamond while the rest of the members of Avengers A.I. rescue him.[8]

Like this? Let us know!
Retrieved from "https://marvel.fandom.com/wiki/Avengers_Artificial_Intelligence_Squad_(Earth-616)?oldid=6451669"
Community content is available under CC-BY-SA unless otherwise noted.