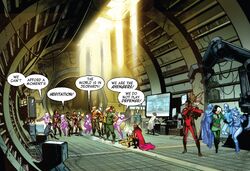 The Avengers Auxiliary Headquarters was an underground warehouse set up by Tony Stark in case of emergencies.[2] It was first used when the Avengers became fugitives due to the machinations of Count Nefaria, and needed to relocate temporarily.[1] Following that incident, the Auxiliary HQ was never used again.

Many years later, in the middle of a contest between the Grandmaster and the Challenger where the Earth was used as battleground, the Avengers Mansion was blasted by surprise by the Challenger's Black Order. Voyager managed to save the Avengers' lives and teleported them to safety in the nick of time, taking them to the Avengers Auxiliary Headquarters. For the duration of the conflict, the Avengers made use of this facility for its purpose.[2]

Like this? Let us know!
Retrieved from "https://marvel.fandom.com/wiki/Avengers_Auxiliary_Headquarters?oldid=5225909"
Community content is available under CC-BY-SA unless otherwise noted.