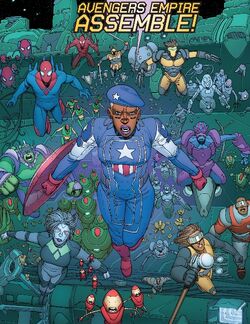 On the eve of Dimitrios final siege of the Golden Knot, the Avengers Empire prepared to stop him, no matter the cost. Victor died in the initial assault, and Doombot sacrificed himself by activating the Black Hole in his chest plate. Unfortunately, Dimitrios was successful in riding Galactus severed head into the Golden Knot along with Captain Alexis, who had been pulled in while attempting to prevent Dimitrios' entrance. Once inside the Golden Knot, their universe was destroyed, and they were greeted by Bald Parrot.[2]

Retrieved from "https://marvel.fandom.com/wiki/Avengers_Empire_(Earth-14161)?oldid=5594409"
Community content is available under CC-BY-SA unless otherwise noted.