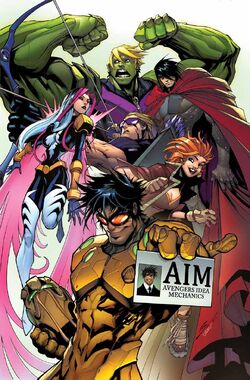 Avengers Idea Mechanics was the result of Bobby da Costa's hostile takeover of the scientific/terrorist organization Advanced Idea Mechanics.[1] Bobby chased off numerous A.I.M. scientists that could be considered a bad influence, and rebranded the company, now transforming it into a group dedicated to international rescue operations with its own Avengers team.

The reputation of the company's former iteration caused S.H.I.E.L.D. to be suspicious of da Costa's company, with da Costa agreeing to have Hawkeye planted on Avengers Island to ensure A.I.M. didn't return to their villainous roots.[2] Songbird was also planted as a spy, with her status being kept a secret even from Hawkeye,[3] though she would later become a triple agent.[4]

A.I.M. came to blows with S.H.I.E.L.D. rather sooner as a consequence of assisting hacktivist Rick Jones in evading authorities. The only members of A.I.M. who opposed this move, Squirrel Girl, Wiccan and Hulkling, were expelled of A.I.M. and had the name of the New Avengers bequeathed to them.[3] Both S.H.I.E.L.D. and the U.S. Army attacked Avengers Island,[5] forcing Bobby and his staff to move their operations to Avenger Base Two.[6]

When Songbird's superior John Garrett discovered she had become a triple agent,[7] he kidnapped her and interrogated her to get the location of A.I.M.'s new base.[8] On da Costa's behalf, several of A.I.M.'s members rescued her from the S.H.I.E.L.D. Helicarrier she was being held.

Taking advantage of A.I.M.'s new confrontation against S.H.I.E.L.D., the evil Maker of W.H.I.S.P.E.R. attacked Avenger Base Two with his New Revengers in an attempt to take over A.I.M.[9] A.I.M. managed to fend off the invaders,[10] and they were later joined by the returned Songbird and the agents who rescued her, as well as the exiled New Avengers, who had been called in by Bobby to help. The arrival of more reinforcements than expected prompted the Maker to flee and move to his Plan B, which consisted of kidnapping the President.[11] However, da Costa overturned his plan, and defeated the villain.

With A.I.M. and S.H.I.E.L.D. being in bad terms, da Costa decided to bring the Maker in to the American government, to be in their good graces and motivate cooperation between them.[12] After da Costa and A.I.M. worked on behalf of the United States to take down rogue A.I.M. splinter cells, General Maverick made a deal with S.H.I.E.L.D. to have A.I.M. become a branch of this organization and start working with the government, becoming American Intelligence Mechanics.[13]

Retrieved from "https://marvel.fandom.com/wiki/Avengers_Idea_Mechanics_(Earth-616)?oldid=5723646"
Community content is available under CC-BY-SA unless otherwise noted.