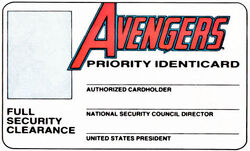 State-of-the-art tech at its finest. These credit card-sized gadgets act not only as identification for all Avengers (active and reserve, East and West), but as communicators and tracking devices. Designed and manufactured by Stark Enterprises, the Avengers identicards have proven to be a valuable resource in the field.[3]

When the New Avengers formed, Tony Stark did not have the funding available to equip the team with identicards.[4] They were eventually reinstituted after the Siege of Asgard.[5][6]

The card is a way to recognize Avengers from non-Avengers heroes. Captain America stated to Cyclops that it was for such reason that Deadpool was often thought to be a X-Man.[7]

After the Avengers received sovereign nation status, She-Hulk remarked that the Embassy ID cards gave top-level security clearance in over a hundred countries...and 10% off at Starbucks.[8]

Each card has a flat-screen monitor to send and receive audio and video data. The identicard can beep like a pager, communicate like a videophone, and record like a mini-recorder; it also has a virtually global range with satellite uplink. As a tracking device, it can be used to locate an Avenger via his or her card's unique signal.[9]

In addition, it can act as a small computer with a numerical access pad. All by itself, this makes it an overpowered calculator, but with appropriate access codes, it can contact Avengers computers, which can then be operated with voice commands. The identicard also acts as an ignition key for Avengers vehicles and as a key to Avengers bases.[10]

The cards are waterproof and are resistant to pressure.[11]

The new cards are now equipped in a way that they appears to be another kind of card ("Rafe's Super Club Card" for Nova's) until the member hold it.[1]

Like this? Let us know!
Retrieved from "https://marvel.fandom.com/wiki/Avengers_Identicard?oldid=6432056"
Community content is available under CC-BY-SA unless otherwise noted.