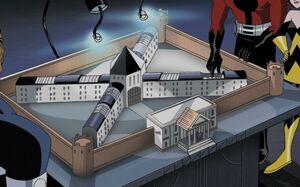 I am just a simple thinker, though some call me mad. You see, I have done the math. This is one of four major super villain prisons. Each holding some of the most powerful criminals on the planet. Catastrophe is inevitable. All systems break down. We will be free, and soon.

Appearing in "The Big House"

Synopsis for "The Big House"

Whirlwind is being escorted to his cell in the Big House, when he decides to try and break free. After destroying a couple of the robotic guards, and giant arm busts through the roof and a single finger pins him to the ground. Looking up, he sees an enormous Hank Pym, holding him in place until more guards arrive and take him into custody. Later, Hank begins to argue with Fury about the ethics of the prison he created. Fury asks them if they even bothered to ask what Whirlwind had stole. A sonic disruptor for Klaw. Inside the Big House, Whirlwind is wanting to know why none of them try to escape, when the Mad Thinker tells him there is no need.

Like this? Let us know!
Retrieved from "https://marvel.fandom.com/wiki/Avengers_Micro_Episodes:_Ant-Man_%26_The_Wasp_Season_1_3?oldid=6846665"
Community content is available under CC-BY-SA unless otherwise noted.