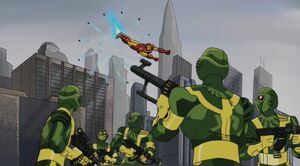 I am not listening to Rhodey anymore, LA-LA-LA. I can't believe this is what you wanted to meet about. The giant robot was more fun than you.

Appearing in "Iron Man Is Born"

Synopsis for "Iron Man Is Born"

In the news, footage from a tourist filming on a pier was shown. The footage showed a giant robot (Ultimo) attacking the pier and then being taken down by Iron Man. The giant robot exploded, and Iron Man saved the tourist from flying pieces of giant shrapnel. James Rhodes was watching this in Tony Stark’s car. Rhodes told Tony that S.H.I.E.L.D. should be fighting bad guys, instead of him. Tony reminded him that he was out of the weapons business, and was now a kinder, gentler Tony Stark. Rhodes then suggested that Tony could at least help S.H.I.E.L.D.’s Hulkbuster unit take out “that monster”, to which Tony refused to listen, saying the Giant Robot was more fun than him. They arrived at Stark Tower, where they were greeted by Pepper Potts, who was angry at Tony for not answering her calls. She told Tony that news just broke out that Hydra unleashed an attack on the United Nations. It was a full assembly, every world leader was there, and SHIELD was 40 minutes away. Tony Stark then donned the Mark VI armor and flew off, assuring Rhodes he would only be gone 10 minutes, 15 minutes max. Iron Man arrived at the scene, where a small team of local S.H.I.E.L.D. units attempting to handle Hydra’s attack. He fired his uni-beam at the Hydra-Bot, calling “timber” as it fell. He was then informed by J.A.R.V.I.S. that the suit’s power was down to 40% after using the uni-beam, which J.A.R.V.I.S. recommended against, and that there were 14 heavily armed targets on the ground. Iron Man then warned, “Attention Hydra goons, you’ve been trying to take over the world for 60 years. It’s not happening.” Suddenly one of the men fired a rocket at Iron Man, prompting him to do things “the hard way”. He locked onto the 14 targets and shot missiles at their weapons, knocking them out. With the armor’s power down to 32%, three large robots were released to destroy Iron Man.

Like this? Let us know!
Retrieved from "https://marvel.fandom.com/wiki/Avengers_Micro_Episodes:_Iron_Man_Season_1_1?oldid=6497078"
Community content is available under CC-BY-SA unless otherwise noted.