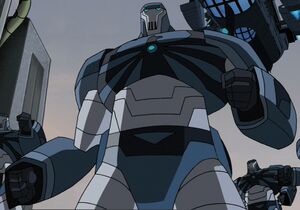 That's my tech! Hydra's using my technology? Against me?

At the SHIELD Helicarrier, Maria Hill informed Nick Fury that they were five minutes out, and local SHIELD units were under attack and unable to respond, and that Iron Man had arrived on the scene. The robots were continuing their attack on Iron Man, when he had JARVIS run an analysis on them. However, his shields were not responding. He was knocked down, threatened by a large drill from one of the robots. JARVIS alerted him that the robots were Hydra Dreadnoughts upgraded with repulsor tech weapons. Enraged that Hydra had stolen Tony’s technology, he diverted all power to his repulsors, as there was not enough power for the uni-beam. However, this did little damage, as the Dreadnoughts also used Tony’s shielding. As the fight continued, Iron Man’s shield reboot sequence was finally in progress. He then threatened, “Show me what else you got, ‘cause you probably stole it from me too.” Meanwhile, at Stark Tower, Pepper and Rhodes were concerned about Tony in his battle. Pepper said that Tony is all alone out there against the people who stole his technology, and there is nothing they can do to help. She understood why he had do it, but didn’t understand why he had to do it alone. As the battle continued, Iron Man knocked a Dreadnought by picking another one up and throwing it onto the other. He saw the power sources on their backs and ripped them out. One of the unconscious Hydra agents woke up and aimed their rocket at Iron Man, but were shot down by another Hydra agent. Whilst still battling, Iron Man used his foot jets to melt the head of one of the Dreadnoughts, but was then hit by the rockets from the last Dreadnought. Suddenly, the SHIELD Helicarrier arrived, firing at the Dreadnought. After knocking it down, armoured SHIELD units come down telling Iron Man to stand down as they await Nick Fury’s orders.

Like this? Let us know!
Retrieved from "https://marvel.fandom.com/wiki/Avengers_Micro_Episodes:_Iron_Man_Season_1_2?oldid=6497079"
Community content is available under CC-BY-SA unless otherwise noted.