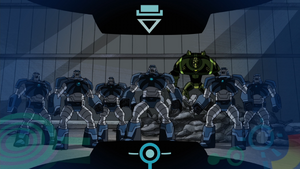 Hydra got into our systems, we have a leak. Find it and plug it. And get me the Black Widow.

Appearing in "Behold the Mandroids"

Synopsis for "Behold the Mandroids"

JARVIS informed Tony that the power is at 26.2%, and as there is no further expenditure, the uni-beam will be available in 2 minutes, 42 seconds. The SHIELD mandroid units again warn Stark to stand down, and come with them. Iron Man, not in the mood for it, scanned the armour, discovering that seven components were Stark Industries technology. Fury told Maria to order the mandroids to stand down and call Iron Man up, which she was reluctant to do. Iron Man asked the mandroids “Where did you get that armour?” To which the mandroids ask him to back away. One of the Dreadnoughts suddenly gets up behind the mandroids, so Iron Man raised his repulsors up to it, ready to fire. The mandroids mistakenly thought Iron Man was going to shoot them, and open fire on him. He then used his repulsors to blast a couple of mandroids out of the way, and then used the uni-beam on the dreadnought, destroying it. After this, Iron Man was exhausted and his armour, having lost a lot of power, had to reboot. He asked the knocked out mandroids if they were okay and removed one of their helmets. He blasted into the Helicarrier, throwing the mandroid helmet to Fury, asking for an explanation. Maria raised a gun behind Tony’s head, telling him to step away from Director Fury, and that he is under arrest. Fury ordered Maria to stand down, saying that he saved the mandroids and the UN from Hydra while they were on a wild goose chase. Tony was furious that Nick had used his inventions to make war machines. Nick said Tony had been selling them weapons and technology for years. They just modified what Tony gave them. Tony, enraged, said, “Try twisted. You twisted what I made, and then you let it leak to Hydra… SHIELD got hacked. Those Hydra Dreadnoughts are about two degrees off your mandroids.” Maria reminded Tony that the mandroids, like SHIELD, save lives, and that if he withholds resources from them, it just gives the advantage to groups like Hydra. Iron man reminded her that weapons don’t solve problems. They only make them worse. To which Nick said, “Wake up, how exactly do you think our problems are going to get worse? You’ve seen what’s out there: The tech Hydras, supervillains coming out of the woodwork, monsters like the Hulk. We need Tony Stark more than we need some armoured vigilante. You can’t do this alone. You’re only one man.” Iron man walked away, and said that one of him is more than enough, that he will get his tech back on his own, and that there’s about three dozen unconscious Hydra agents waiting for them. After he left, Fury admitted that Hydra got into their systems, and ordered Maria to find the leak and plug it. As Iron Man flew away, SHIELD agents were arresting the Hydra goons and taking them to the vault. As one of the Hydra goons saw Iron Man fly away, he grinned.

Like this? Let us know!
Retrieved from "https://marvel.fandom.com/wiki/Avengers_Micro_Episodes:_Iron_Man_Season_1_3?oldid=6497080"
Community content is available under CC-BY-SA unless otherwise noted.