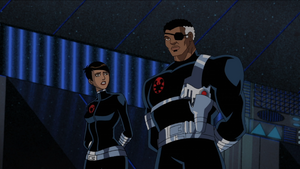 Tony, back at the armoury, told Rhodes about the robots, and he said that he tried watching it on TV, but Pepper wouldn’t let him. Pepper admitted that she never watches, because she doesn’t need too. She already knows Tony will be late for his meeting. As Tony was taking the armour off, Rhodes reminded him, “You don’t have to do it alone, you know… Taking on SHIELD, Giant robots, supervillains. The whole world doesn’t have to rest on your shoulders.” Tony asked who would help him against this. The SHIELD jets took the Hydra prisoners to the Vault. Because Hydra began escalating their attacks on everyone, Fury decided to oversee the drop off and check in on a “friend” to see what he knows. As Fury and Maria took the elevator, he asked her what she knew about the Vault. She said it is the first of the supervillain prisons, specifically created to hold tech based criminals and their gear; designed by Tony Stark until he decided not to work on SHIELD projects; current high profile prisoners include the Crimson Dynamo, Technovore, MODOK, and Hydra’s boss: Baron Wolfgang von Strucker. Fury then began talking to Strucker. Meanwhile, as the Hydra prisoners were being taken in, with weapons removed, they found a bag with a mechanical arm (the Satan Claw) inside. It was discovered that one of the Hydra agents had an implant, so SHIELD ordered him to get on the ground. The man with the implant, Grim Reaper, unleashed his scythe and took out the SHIELD agents. He grabbed a cloak and took the bag. When Fury was done questioning Strucker, Maria asked Fury if he really thought Strucker would tell him anything. Nick said that Strucker revealed plenty: “Something’s going down, and soon. Question is, what?” An alarm sounded and Fury tried communicating with the other SHIELD agents, but there was no response. Grim Reaper came down the elevator, and Nick realised the whole thing was a setup. The attack on the UN was just to spring Strucker. Fury and Hill began firing at Grim Reaper, who then knocked them both down. He then broke Strucker out, handing the arm to him. As they leave, Strucker, picks one of the SHIELD agents up with the arm. The SHIELD agent then aged, and Strucker became younger and stronger. They made their way out to a jet car, but Fury jumped on, much to their surprise. During a fight between Strucker and Fury on the car, Strucker used his arm to age Fury. As his hair went grey, he knocked Strucker off the car, who then landed on the landing strip of the Vault and was arrested by Maria. Fury then began fighting Grim Reaper. He sped up the car, hoping to knock Grim Reaper off. However, his plan backfired, when Grim Reaper pushes Fury off the edge. Grim Reaper, laughing, then discovered Fury had planted a bomb on his scythe. It exploded, causing the car to blow up and Grim Reaper to fall in the snow. Fury, still falling due to his wing parachutes landed on top of Grim Reaper. As Grim Reaper and Strucker were taken back into the Vault, Maria asked if all supervillain prisons (the Cube, and the Big House) were like the Vault. Nick replied, “No. All four are different”.

Like this? Let us know!
Retrieved from "https://marvel.fandom.com/wiki/Avengers_Micro_Episodes:_Iron_Man_Season_1_4?oldid=6497081"
Community content is available under CC-BY-SA unless otherwise noted.