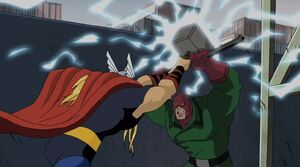 Move back, mortals. Thor the Thunderer will deal with these villains.

Appearing in "Thor the Mighty"

Synopsis for "Thor the Mighty"

The Wrecking Crew were stealing Stark Industries technology from a dock. Thunderball took what appeared to be a gamma ray device, remarking “Stark may have stopped making weapons, but he’s still making all kinds of good stuff”. The Police and paramedics were called with a code blue. Jane Foster, a paramedic, was driving to the scene with another paramedic who asked what a code blue meant. She replied: “Supervillains”. The police were engaged in a fight with the Wrecking Crew, when Jane arrived and began medically assisting the policemen, whilst the other paramedic remained in the car, terrified of the Wrecking Crew. After all of the policemen had been knocked out, Thunderball aimed Stark’s gamma ray device at Jane wondering what the thing was capable of, but was hit suddenly by a soaring hammer. Thor summoned the hammer back to him and warned Jane to stay back while he dealt with the villains. Both Bulldozer and Piledriver charged at Thor, only to be knocked back. Wrecker hit him with his crowbar sending him flying into a pile of shipping containers. Thor flew back and said, “Surrender now, and I will show mercy”, while fighting Wrecker. Wrecker knocked him over, where Thunderball sent a container along with the crane holding it up crashing on top of him. All four laughed at the fallen Thor, but were surprised to see him blast out from under the container and knock three of them over. Wrecker grabbed Jane with his crowbar at her neck, threatening to Thor. To which, Thor asked, “Have you no honour?” Wrecker replied, “Not even a bit.” Thor then answered, “Then you should be familiar with the attacking of a foe from behind” when Mjolnir suddenly hit Wrecker in the back of the head, knocking him out. Thor was curious as to why Jane would risk her life in such a way when she had no powers, no armour and no weapons. Jane replied that she helps people, that’s what paramedics do. Suddenly, they were interrupted by a message for Thor from Heimdall. He told Thor he was needed in Asgard.

Like this? Let us know!
Retrieved from "https://marvel.fandom.com/wiki/Avengers_Micro_Episodes:_Thor_Season_1_1?oldid=6497086"
Community content is available under CC-BY-SA unless otherwise noted.