"My Brother, My Enemy" 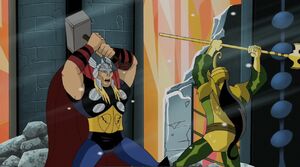 The Odinsleep nears. Once a year, I must slumber to regain my strength. So that Asgard may live.

Appearing in "My Brother, My Enemy"

Synopsis for "My Brother, My Enemy"

Loki blasted Thor back, saying that he and Odin deserved what was coming. Thor didn’t wish to fight Loki, as once they were brothers, friends. They used to fight side by side as the sons of Odin. Thor assured him that it could be that way again. Loki said that Thor had already made his choice to remain blind to Odin’s lies, and for that, he would suffer. Thor summoned Mjolnir and hit Loki back. Loki then used a magic blast on Thor, who deflected it with his hammer, and knocked Loki over again. He summoned a massive lightning bolt onto Loki, but he disappeared, only to reappear behind him, knocking him down. He said to Loki, “Surrender brother, it need not be this way.” Loki answered, “I think it does” and began mocking Thor’s bravery. Thor then grabbed him with his hammer at the ready and said “Come brother, you have much to answer for”. He tied him up and took him to Odin, who was sitting at his throne. Odin said that Loki had gone too far, so he would banish Loki to the Isle of silence, where no one will have to suffer his lies and deception. Suddenly, he teleported Loki to the Isle of silence, where there was no colour (everything was in black and white), and more importantly, no sound. Meanwhile, Odin explained, “The Odinsleep nears. Once a year I must slumber to regain my strength, so that Asgard can live. There is much for you to prepare.” Thor replied saying that Balder and Sif could watch over Asgard, whereas he must attend to Midgard. Odin said that he needed Thor here, and that Asgard is his responsibility, not Midgard. Thor answered, saying that the mortals needed him, as their world is spawning dangers they had never seen before, evil that will consume them, unless he is there to stop them. Odin said that Balder had told him that the humans are more capable than Thor gave them credit for, as he saw the valour of Jane Foster. Thor, angry that Odin was watching, said “I will always be here to protect Asgard, but I will not play this game. Loki is not wrong, father, you toy with us all. Telling us whatever you need to in order to keep us under your heel. You could have stopped Loki’s attack before it started.” Odin, furiously exclaimed “Enough. You dare defy me?” Thor replied as he left, “If Asgard is threatened, I will be here, but until then, I choose Earth.”

Like this? Let us know!
Retrieved from "https://marvel.fandom.com/wiki/Avengers_Micro_Episodes:_Thor_Season_1_3?oldid=6497088"
Community content is available under CC-BY-SA unless otherwise noted.