"The Isle of Silence" 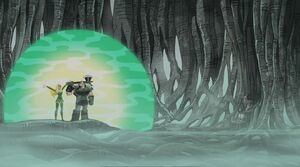 It is my plan after all. No one is ready for what comes next.

Appearing in "The Isle of Silence"

Synopsis for "The Isle of Silence"

As Thor leaves Asgard, the Enchantress watches him go. She then transports herself to the Isle of Silence. There, Loki sits alone, recalling his plan as he set it in motion. Going to the Frost Giants and telling them that Asgard plans to attack them, telling the Wrecking Crew to attack a Stark Industries freighter while he is disguised as The Leader, having the Enchantress "warn" Thor of the Wrecking Crew's attack at the docks, and telling Odin that Thor has fallen for the mortal Jane Foster while he is disguised as Balder. The Enchantress then arrives on the Isle of Silence along with the Executioner. She casts a spell to protect them from the silence of the place and Loki asks if all goes according to his plan.

Like this? Let us know!
Retrieved from "https://marvel.fandom.com/wiki/Avengers_Micro_Episodes:_Thor_Season_1_4?oldid=6497090"
Community content is available under CC-BY-SA unless otherwise noted.