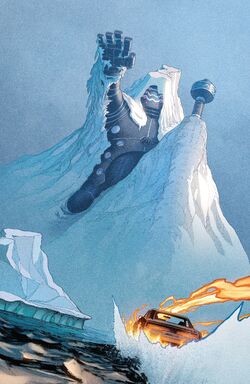 They want to give us a gift. The Progenitor. The first Celestial to ever visit the Earth. The one whose death gave birth to us all. They can't bring it back to life after so long, but... they don't want it to be buried anymore. It belongs in the sun. Shining like a beacon at the top of the world it helped forge. A beacon of hope. And of the wonders of life. And a warning about what'll happen... if anyone ever tries to stomp those out.

The origins of the Avengers Mountain date back four billion years, when the Celestial known as the Progenitor came to Earth to die after being infected by the Horde.[1] His corpse laid unmoved within the Arctic Circle, and its resting place became the bottom of the Arctic Ocean at the North Pole.[2]

Following the defeat of the Final Host of Dark Celestials at the hands of the Avengers,[3] the resurrected First Celestial Host brought forth the Progenitor from its watery grave and bestowed it upon the Avengers as a gift to serve as their new headquarters and a reminder of the wonders of life on Earth.

The corpse was refurbished by the finest architects from Wakanda and technicians from Alpha Flight to make the mountain livable.[4]

The Avengers Mountain comes equipped with living headquarters for each member of the team, a gym, a laboratory, and docks for ships. Every floor of the building is connected through a sophisticated elevator called the Spinal Lift.[4] The Avengers managed to partially reanimate the Progenitor's circulatory system and use the cosmic energy from its blood cells to turn one of the ventricles of its heart into a teleportation hub with global reach called the Circulator. The remains of the Celestial's cerebrum were retrofitted into a server room, housing the most powerful computer terminal in the galaxy with the potential to decrypt countless data stored within the brain tissue. Each finger of the Progenitor's right hand was turned into a hangar[5] and the intestinal tract remodeled into a detention facility.[6] A section of the Avengers Mountain houses an armory containing copies of Iron Man Armor, Captain America's Shields, the Wakanda Hulkbuster, and weapons of different origins.[7]

Like this? Let us know!
Retrieved from "https://marvel.fandom.com/wiki/Avengers_Mountain?oldid=6020093"
Community content is available under CC-BY-SA unless otherwise noted.