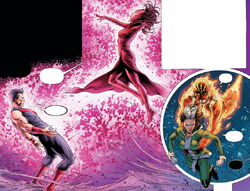 The story of this Avengers Unity Division followed the same path of its Earth-616 counterpart up until the Scarlet Witch and Wonder Man were abducted by the Apocalypse Twins.

The mutant members of the Unity Division and the non-mutant members separately got to the Apocalypse Ark, where the Twins planned to make the Scarlet Witch cast a spell to bring all of mutantkind to their Ark, while the Earth was left too die at the hands of Exitar the Executioner.[1]

Even though the Scarlet Witch and Wonder Man planned to cast the spell, but bring the mutants to fight the Twins, Wanda was killed by Rogue with the help of Sunfire. Rogue soon after died at the hands of one of the Twin's Horsemen of Death, the Grim Reaper. With her last breath, Wanda finished the spell,[2] and every mutant was brought in a dormant state to the Twin's pods in the Ark, including Havok, Wolverine and Sunfire.

After Thor and Wasp learned from Uatu the Watcher that the arrival of Exitar was caused by the Apocalypse Twins with the use of Jarnbjorn, he tried to reclaim said weapon from them, while Wasp attempted to destroy the Tachyon Dam, a device which prevented any time-travel, so the Avengers could get help from Immortus. At the same time, Captain America tried to fight the Twins, but he was defeated and captured.[3]

Cap then traveled to the room with the Tachyon Dam, and tried to help Wasp destroy it, but he was killed by the Grim Reaper. As Thor reclaimed Jarnbjorn, Eimin distracted him long enough to prevent him from stopping Exitar, thus, Thor failed to save the Earth and was forced to open a portal to Asgard to prevent from being killed by the fragments of the exploding planet.[5]

Over the years, the mutants relocated on Planet X, ruled by Eimin, who managed to convince everyone the Avengers were the ones who had doomed the Earth. Wasp, the last human, and Havok were fugitives on Planet X, and finally managed to destroy the Tachyon Dam, allowing Kang and the Chronos Corps, a team Thor was now part of, to arrive.[6]

After rescuing Sunfire and Wolverine, who were being held prisoners and tortured for having tried to stop the Twins, the former remaining members of the Avengers Unity Division had their consciousness brought back in time by the Chronos Corps to prevent Earth from being destroyed.[7]

Like this? Let us know!
Retrieved from "https://marvel.fandom.com/wiki/Avengers_Unity_Division_(Earth-13133)?oldid=5553566"
Community content is available under CC-BY-SA unless otherwise noted.