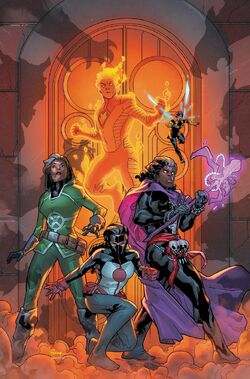 After the war between the Avengers and the X-Men, Captain America realized that the Avengers should have done more to help the mutant population. As a result, he formed a new sub-team of Avengers in hopes of unifying mutants and humans as one.

He chose Havok to lead his team and become the symbol to represent mutants as Professor X and Cyclops once did.

Their first threat was a brain-washed Avalanche, who was sent by the Red Skull in order to create chaos and increase the fear against mutants. The Avengers managed to save innocent citizens from Avalanche, who disappeared from the scene when the fight was over.[1]

As the Avengers helped remove debris and looked for more survivors, they realized how the inclusion of Havok started to clear the name of mutantkind. Wolverine arrived to the scene and was asked by Captain America to join the team.[2]

After usurping Professor X's body, the returned Red Skull managed to procure telepathic powers for himself, with which he used to provoke citizens of New York into a mass assault against mutants and possible mutants. He also used his new power to force Scarlet Witch and Rogue to allow themselves to be attacked. With the help of the S-Man Honest John, he managed to even manipulate Thor.[3]

However, Red Skull's skills were still erratic and couldn't completely control Captain America and an attack against him was distracting enough to lose control on Rogue and the Scarlet Witch. After being overpowered by the rest Uncanny Avengers, Red Skull escaped with a promise to return. In the aftermath, both Rogue and Scarlet Witch joined the team,[4] followed by Sunfire, Wasp and Wonder Man.[5]

After being abducted by the Apocalypse Twins, the Scarlet Witch was convinced to help them save mutantkind from the imminent destruction of Earth at the hands of the Celestial Exitar, a death sentence that was secretly caused by the Twins themselves, by incriminating the Earth for a crime committed with the Asgardian axe Jarnbjorn, as it had been used to kill a Celestial Gardener.[6]

Secretly, along with Wonder Man, whom the Twins captured so he could power the Witch to cast the spell necessary to transport all of Earth's mutants into the Twin's ark, Wanda planned to double-cross the Apocalypse Twins and cast all the mutants to fight the twins.[7]

However, their plan would have failed and the Earth would have died, along with Scarlet Witch and Rogue, and the only remaining human would have been the Wasp.[8] From that dire future, the consciousness of Wolverine, Thor, Wasp, Sunfire and Havok were transported to the present.[9]

Wanda and Simon were visited by the rest of the Unity Division, and informed about what would happen if they didn't act differently. By absorbing the powers of almost every Avenger and X-Men, Rogue prevented Exitar from literally stepping on Earth and destroying it, while Thor slayed the Celestial with the retrieved Jarnbjorn, which was in possession of the Twins. The Avengers also destroyed the Twin's Tachyon Dam, a device which prevented any physical time-travel. By doing this, they accidentally allowed Kang (who had helped the future remaining Avengers to travel to the present) to arrive, along with his Chrono Corps, and absorb Exitar's blood, gaining enormous power.[10]

As the Infinity Watch arrived to help the Avengers fight the Chronos Corps, Havok and Sunfire confront and ultimately defeat Kang, who was forced to flee along with his soldiers. In the aftermath, Rogue realized she had once again lost control over her powers, but also now had Wonder Man's consciousness in her mind, as well as his powers.[11]

As part of his plan to create mutant concentration camps in Genosha, the Red Skull's S-Men abducted Havok, Rogue and the Scarlet Witch. They managed to break free thanks to Rogue's new powers from Wonder Man, and rescued Magneto, whom they found captured after a failed attempt to kill the Red Skull.[12] When they confronted the Red Skull and his S-Men, Magneto killed Shmidt's disciples and brutally murdered the villain. However, his actions unleashed the Red Onslaught.[13]

Magneto and the three members of the Unity Division tried to confront the Red Onslaught, and were helped by the arrival of the Avengers, both teams of X-Men, and allies of both teams. However, the Red Skull was prepared, and unleashed his Stark Sentinels.[14] The Scarlet Witch and Doctor Doom managed to cast a spell to invert the axis of Skull's brain, to make a fragment of Charles Xavier still present in it take control of the Skull's body and stop the Red Onslaught. The inversion spell was a success, and the Red Skull was knocked unconscious and reversed from his Red Onslaught form. Before he could wake up to reveal whether Charles Xavier was now in control or not, as the X-Men wanted, the Avengers decided to be cautious and take the Red Skull prisoner in the Stark Tower. This caused Havok to resign from the Unity Division and side with the now-unified two teams of X-Men and his brother, with whom he reconciled.[15]

After a reinversion spell was cast in the wake of the inverted X-Men's attempt to destroy humanity with a gene bomb, and the inverted Avengers trying to kill them, the Avengers Unity Division was rebuilt, with the addition of Doctor Voodoo.[16] Sabretooth and Vision joined the Unity Division, now under Rogue's leadership, and were transported to the High Evolutionary's Counter-Earth while searching for the Scarlet Witch and Quicksilver.

The members of the Unity Division were scattered across the planet: Captain America was trapped and assimilated by tree-like creatures, Vision found himself in a technological city where he met an android named Eve, Rogue was found and experimented on by the Master Scientist who expunged Wonder Man from her, Doctor Voodoo appeared in a destroyed city inhabited by the souls of those killed in the High Evolutionary's search for genetic perfection, and Sabretooth appeared in one of the Counter-Earth's main cities where he was quickly taken down by the New Men and later forced to obey the Evolutionary.[17]

The Unity Division was rebuilt with the goal of not only unifying humankind and mutantkind but Inhumans as well. Rogue remained to represent the mutants and resume her role as team leader. Inhuman ally Human Torch and new Inhuman Synapse joined to represent the Inhumans. Quicksilver and Jericho Drumm also remained with the team, but Quicksilver's sister Scarlet Witch, the Vision, and Sabretooth chose to not to rejoin. Spider-Man decided to join as well. Deadpool was invited to join by Steve Rogers, who remained on the team, after Wade helped to save Rogue's life.[22]

When the Super-Adaptoid returned to Earth, it was encountered by the latest version of the Avengers Unity Division. It was able to copy the powers of the Human Torch before, on a whim, Deadpool touched it barehanded. The Super-Adaptoid copied Deadpool's powers, but it also copied Deadpool's cancer and became overrun by the disease, killing the android's organic properties. This resulted in Wade being scolded for his reckless abandonment and lead to Spider-Man leaving the team.[23] Although the team (especially Human Torch) took Spider-Man's loss hard, they grudgingly accepted Deadpool's presence, in part because his popularity was funding the team (the government had pulled their funding after realizing that they'd do their job without money and Cap refused to allow corporate funding to potentially corrupt their mission), but also because Cap had personally vouched for him.[23]

Their foes quickly included the Nuhuman known as the Shredded Man[23] (against whom the unsought aid of Cable was invaluable);[24] the Ultron / Hank Pym hybrid (after whose defeat Wasp joined the team);[25] and the Black Knight.[26] They also hunted down the Squadron Supreme after the extra-dimensional heroes murdered Namor,[27] but the Squadron escaped justice to Weirdworld.[28] Although they took no part in it, the Unity Squad also kept close tabs on the mutant Apocalypse Wars after Magneto's X-Men destroyed Genosha.[29]

Cap revealed that the Unity Squad's true objective was to retrieve the brain of Professor X from Red Skull, which persuaded Cable to become a proper member of the team.[30] The Unity Squad, along with the regular Avengers, were involved in the Pleasant Hill debacle.[31]

During the second superhuman Civil War, Cable enlisted the help of mutant villains Sebastian Shaw and Toad to break into a military facility in the search for resources to develop an antidote against the Terrigen Mist poisoning that affected millions of mutants. The illegitimacy of this action combined with the involvement of other Unity Squad members like Rogue and Deadpool prompted Captain America to dissolve the team, deeming it a failure.[32]

Most of the members of the defunct Unity Division, some of whom didn't even know the team had officially disbanded, traveled to Japan in order to prevent the Hand from resurrecting the corpse of the recently-deceased Bruce Banner. Even with the help of former Hand leader Elektra, the heroes failed to stop the resurrection ritual, and witnessed as a mindless, rage-fueled Hulk went on a rampage in Tokyo.[33]

After the undead Hulk was successfully stopped and Banner's spirit freed from The Hand's corrupt magics, The rest of Unity Squad agreed to continue working together without Steve Rogers.[34] The Red Skull eventually made his move against the Avengers Unity Squad, activating a psychic trigger he had implanted on Quicksilver's mind to take control over it and force him to capture his teammates so he could take control of their minds. Deadpool was able to resist the Red Skull's control while Cable avoided having his mind taken over by erasing his own consciousness, rendering him comatose for the rest of the situation. The Red Skull had the Unity Division attack New York City, but his plan fell through when Deadpool placed one of Magneto's helmet on Rogue, freeing her from the Skull's control and allowing her to knock him out.[35]

After Charles Xavier's brains were removed from the Skull's brain by Beast, Rogue and Human Torch destroyed them to prevent further misuse of Xavier's psychic powers.[36] Psynapse helped Cable come out of his coma, but he chose to not rejoin the Unity Division. Deadpool did as well.[37]

As part of a Hydra scheme orchestrated by an alternate reality Steven Rogers to take over the United States of America, a contingent of villains attacked Manhattan to lure out as many superheroes as possible. The Unity Avengers answered the call and joined many other heroes in fighting the villains. Then the villains were teleported away while Baron Zemo used the Darkhold to boost the powers of the villain Blackout to trap half of Manhattan and the heroes, including the Unity Division, there in an impenetrable Darkforce dome.[38]

Only Quicksilver was able to escape being trapped behind the dome,[39] and joined the Underground to resist Hydra after it had taken over the United States.[40] The rest of the Unity Division remained trapped behind the Darkforce dome and had to contend with evil creatures from the Darkforce dimension, Shocker, and Scorpia as well as a demon-possessed Doctor Voodoo.[41]

After the Darkforce dome over Manhattan was lifted following the death of Blackout,[42] the Unity Division joined the Underground and other heroes in ending the Hydra regime and were successful.[43]

Following a fight with the villain Graviton that destroyed much of Avengers Mansion, Scarlet Witch rejoined the Unity Division despite some initial reluctance from Rogue.[44] When Quicksilver's recklessness nearly got Synapse killed in a battle against Juggernaut, he was thrown off the team until he learned from his mistakes.[45]

After aiding the U.S.Avengers and the main Avengers team in solving a global crisis caused by the Grandmaster and the Challenger turning the Earth into a game board for their cosmic game, the Unity Division chose to disband.[46]

Like this? Let us know!
Retrieved from "https://marvel.fandom.com/wiki/Avengers_Unity_Division_(Earth-616)?oldid=5886948"
Community content is available under CC-BY-SA unless otherwise noted.