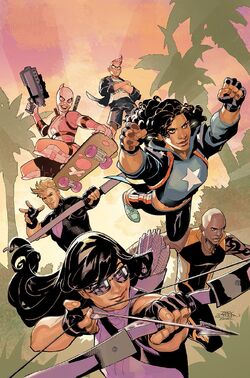 While the majority of the active roster of the Avengers were kidnapped and forced to participate in the Secret Wars, longtime member Vision declared himself chairman in chairwoman Wasp's absence. He had detected a great threat to come, the Dire Wraiths, and in order to better combat the threat, decided to establish a second active team of Avengers. He requested and received permission to do so from the U.S. government, which had begun to take a more active supervisory role towards the Avengers. Recently returned veteran member Hawkeye was appointed as chairman of the West Coast roster.[5] Selecting his team and a headquarters, the bowslinger set to the task. The Vision would also go on to attempt the creation of a third Avengers team, but was turned down by potential Midwest Avengers Chairman Doc Samson.[6]

The original lineup included team leader Hawkeye, his wife Bobbi a.k.a. Mockingbird, the animalistic Tigra, industrialist-turned-superheroic actor Wonder Man and the invincible Iron Man. Unbeknownst at first to the others, this Iron Man was not the original, but a substitute. Rhodey revealed he wasn't the original Iron Man shortly into his career with the group.[7] Stark would, however, soon reclaim his Iron Man identity and join the group himself.[8] Dr. Hank Pym, a founding Avenger as Ant-Man (and subsequently Giant-Man, Goliath, and Yellowjacket) was offered the open sixth slot in the lineup, but he turned it down to act as their compound manager and resident scientist. Hawkeye and Mockingbird acted as the guiding force behind the West Coast team.[8]

The West Coast roster was slightly more irreverent than their East Coast counterparts, taking upon themselves the nickname 'Wackos'. Their initial efforts to fill the sixth slot on the team involved courting the Thing (by Hawkeye) and Firebird (by Mockingbird), but ultimately neither hero joined the Avengers West full time.[9]

During one of their most fateful missions, the team became stranded in the past, its members separated in various historic eras. While most of the team was caught in ancient Egypt, Mockingbird was held captive in the Wild West by the Phantom Rider, who used amnesia-inducing drugs to convince her that she was his lover. Parallel to this adventure ran the salvation of Hank Pym, and his return to heroics. Moon Knight helped rescue the team, and he and Pym each accepted invitations to join the team.[10]

The adventure in time left repercussions for the team to deal with. Mockingbird and Hawkeye separated after he was told through Phantom Rider's spirit she had allowed him to fall to his death. Bobbi, along with Tigra and Moon Knight, left the group and with Bill Foster briefly had a team of their own. Tigra soon returned, and later Mockingbird, but the rift between the team's leading couple was far from healed.[11]

When the United States government forcibly imposed a new field leader on the team, USAgent, Hawkeye quit in protest. No longer a couple, Hawkeye and Mockingbird still worked together to check out rumors of an unsanctioned team of Great Lakes Avengers. The GLA turned out to be an offbeat group of neophyte Midwestern heroes, whom the pair offered their mentorship to.[12]

The Vision was reassembled, but his personality was largely a blank, emotionless slate. Wonder Man, who as the Vision's "twin" also harbored feelings for the Scarlet Witch, refused to serve as a template for his brother's thoughts again. The love triangle involving Simon, Wanda, and the Vision was salient throughout the tenure of the WCA. The original Human Torch (Jim Hammond) was also revived, leading to doubts as to what the Vision actually was. Meanwhile Hammond was asked to join the team, an offer he gratefully accepted, though he served only a brief amount of time before taking a leave of absence and relegating himself to reserve status.[13]

Agatha Harkness visited her old student, the Scarlet Witch, revealing that the Witch and the Vision's twins were not real, but magical constructs created from fragments of the demon Mephisto's soul.[14] The Scarlet Witch, already under strain from the Vision's dismemberment, her kidnapping by the forces of Set and That Which Endures, and the influence of Immortus, went insane. Her mental state was taken advantage of by her father, Magneto, and she once again became a villain for a time.[15]

The other Maximoff twin, Quicksilver rescued his sister from Magneto's Asteroid M headquarters only to have her kidnapped by the time traveling Immortus. Immortus' entire plan was to use Wanda, as a "nexus being" capable of safeguarding the future of humanity, from the wrath of the Time-Keepers. With the help of Agatha Harkness, the Avengers were able to travel to Limbo to rescue the Scarlet Witch. The Avengers fought Immortus' Legion of the Unliving, doppelgangers created out of Space Phantoms, and were successful in helping Wanda regain her sanity.[16] Quicksilver unofficially joined the team for a time before dropping down to reserve status, and ultimately leaving to join the new government-sanctioned X-Factor.[17][18]

Two gigantic Terminus creatures attacked the United States were repulsed with the combined efforts of the East and West Coast teams as well as the Great Lakes Avengers. Machine Man joined the team as a reservist. The team was reorganized in the wake of the Avengers obtaining a United Nations charter, with USAgent not making the final cut[17]

The team gained new members in the form of Spider-Woman (Julia Carpenter) and the Living Lightning. USAgent also rejoined the ranks.[19] Mockingbird, still estranged from Hawkeye, nonetheless remained a reserve member. The team also got swept up in the events of "Operation: Galactic Storm", the aftermath of which created tensions in both teams when Iron Man, against orders, led a group of Avengers to execute the Kree Supreme Intelligence.[20]

Following the Avengers' return to Earth, the West Coast team encountered Ultron again, this time accompanied by his newest created mate, Alkhema, based on the brain waves of Mockingbird. During the confusion, Mockingbird was kidnapped and replaced by a Skrull agent who was unfamiliar with the impending divorce of Hawkeye and Mockingbird. In the end Alkhema betrayed Ultron to the team, who were assisted by the Vision.[21]

Hawkeye reassumed his Goliath identity temporarily, during which time he and Mockingbird managed to reconcile due to the Skrull imposter's longterm plans. Iron Man and Wonder Man left the team, and allies War Machine (Jim Rhodes) and Darkhawk joined, the latter as a reservist. Some members of the team were also directly involved in the events of the Infinity Crusade.[22]

During the team's last major adventure, Satannish the Supreme and his Legion captured Mockingbird and took her to his realm. To retrieve her, the West Coast Avengers followed and fought the combined forces of Mephisto and Satannish. Mockingbird was tragically killed by Mephisto, who as the Prince of Lies never revealed her Skrull heritage, while the team was trying to escape from his other-dimensional realm.[23]

After events in Genosha,[24] the East Coast team convened a meeting with the West Coast branch to discuss the future of the team. It was voted on and decided that due to an ever-changing membership, in-fighting among the members and attacks on the Compound it had proven too costly to maintain a separate branch of Avengers and the team was to be folded back into the East Coast branch. This decision came despite the even more fluid nature of the East Coast roster, and the fact that they had lost Avengers Mansion to the Masters of Evil. However, most active members of the West Coast team (Scarlet Witch, Iron Man, Spider-Woman, Wonder Man, and USAgent) were unhappy with this decision, and resigned from the Avengers entirely.[25] They went on to form a new team, Force Works.[26]

The West Coast Avengers were reformed years later by Kate Bishop, an archer who shared her vigilante moniker with Clint Barton. While operating in Los Angeles, Kate was encouraged by Barton to form and lead a team to help protect the West Coast. Kate's recruitment drive failed for the most part due to a lack of local superheroes, and the team ended up being formed by Clint (working part-time), her boyfriend Fuse, her friend America, and Gwenpool. Desperate for funding, Kate also welcomed Kid Omega into the ranks since he had signed a contract with a reality television crew, which would also sponsor the team.[27] The new West Coast Avengers first stopped B.R.O.D.O.K. and an army of women turned into giant monsters (which included a brainwashed Tigra),[7] and then a group of villains led by Madame Masque, with the help of Kate's ex Noh-Varr.[28] Fuse's sister Alloy also joined the group when they confronted a group of vampires.[9]

During the War of the Realms, the West Coast Avengers - minus Kate, who had been drafted onto the Babysitters Club - were battling Frost Giants in San Francisco, when Superior Spider-Man, who wanted to take advantage of America's powers, arrived and drove the Giants away with concentrated sun rays. Octavius suggested going to the beasts' origin, an idea the Avengers approved but could not perform at once since the Realm's magical properties prevented America from transporting them there. At Alloy's suggestion, they left for New York City, helped the Fantastic Four battle more giants, and through Mr. Fantastic's studies on the Bifrost, Octavius artificially replicated the magic energy to enable America to open a portal to Jotunheim. The Jotunheim Strikeforce convinced the group to instead keep Earth safe instead of going to the war's core, with Otto only giving in after Gwen convinced him.[29]

Retrieved from "https://marvel.fandom.com/wiki/Avengers_West_Coast_(Earth-616)?oldid=5733299"
Community content is available under CC-BY-SA unless otherwise noted.