Avengers of the Supernatural 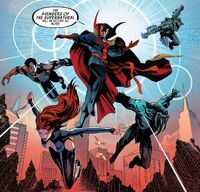 Base of Operations
Mojoworld
Affiliations

The Avengers of the Supernatural were a group of supernatural heroes chosen by Mojo for his newest reality show. They were mind-controlled into abducting the Avengers Unity Division from the Avengers Mansion.

Once in Mojoworld, both teams were made to take part in a reality show called "Martian Transylvania Super Hero Mutant Monster Hunter High School," in which the mutants of the Unity Division were goth outcasts, the rest were football stars and cheerleaders, and the Avengers of the Supernatural were the geeks of the High School. As part of the show, the Scarlet Witch told Johnny Blaze she was pregnant, but the Spirit of Vengeance wasn't under the influence of Mojo, for which it believed it would really have an offspring. Blaze was possessed by the spirit, and as he went "too far out of character," Mojo's influence over the other heroes was broken too.

The Ghost Rider started rampaging through Mojoworld looking for sinner souls to punish, and the Avengers attempted to let him do it, until Mojo convinced them to save Mojoworld, as there were numerous innocent lives. From a skyscraper, the Ghost Rider begun submitting the inhabitants of Mojoworld to his Penace Stare.

Having saved Mojoworld and having controlled the Spirit of Vengeance, the Avengers of the Supernatural and the Unity Divison returned to their universe, where they quickly started a pool party.[1]

Retrieved from "https://marvel.fandom.com/wiki/Avengers_of_the_Supernatural_(Earth-616)?oldid=5544758"
Community content is available under CC-BY-SA unless otherwise noted.