Marvel Database
Register
Don't have an account?
Sign In
Advertisement
in: Events, Earth-616, Avengers vs. X-Men (Event),
and 3 more 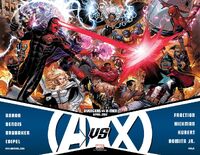 When the Phoenix Force approaches Earth, Hope Summers is assumed its next host. The X-Men and the Avengers are divided on how to handle the situation. The X-Men believe that the Phoenix Force will herald the rebirth of the Mutant Species, while the Avengers believe that it will bring an end to all life on Earth. This leads to a war between Marvel's two powerful superhero factions.

In deep space, Nova (Sam Alexander) tries in vain to warn Terrax of an incoming threat: the Phoenix Force but failed.[1] However, it consumes his planet.

During an Avengers' mission to take down the Lethal Legion, Falcon was suddenly shot down by an unknown sniper. When his absence was noticed, Captain America went to look for him, only to get captured by the same person, who was revealed to be Cable.[2] He had come from a future in which the Avengers' interference with Hope and the Phoenix Force led to the destruction of Earth as he knew it. Eventually, peace was made and Cable was cured of his techno-organic virus.

The Avengers and X-Men nearly came to blows over the Scarlet Witch.[3] The Scarlet Witch and Hope individually continue their efforts towards being heroes.[4]

In New York, the Avengers have assembled for a meeting. An object crashes into the city, sending Earth's Mightiest Heroes into action. After dealing with the damage from the impact, they discover that the object was in fact Nova, who cryptically whispers "It's Coming" before fainting.[5] On Utopia, Cyclops trains Hope, while Emma Frost and Magneto are watching from afar. Scott pushes Hope to her limits, causing her to manifest the Phoenix. All present are shocked.

Captain America and Iron Man meet with the president, informing him of the situation. Nova's warning led them to discovering that the Phoenix Force was headed on a destructive path towards Earth. A team of Avengers are dispatched to destroy or otherwise divert the Phoenix from its path: a suicide mission. Suddenly, an alarm warns them of a Phoenix flare on Earth. Unbeknownst to them, it is Hope. The Jean Grey School is also alerted, Beast having set similar alarms.[6]

Consulting Wolverine, Captain America learns of Hope Summers and secures his support. He organizes the Avengers at the mansion, briefing them on the mission. Storm and Power Woman leave the Avengers, the former returning to the X-Men. Back on Utopia, Cyclops talks with his Extinction Team about Hope and the Phoenix. He believes it to be a potential game-changer for mutantkind. Captain America arrives to take Hope into protective custody, hoping to avert Earth's destruction. They come to blows, and Cap orders S.H.I.E.L.D. and the Avengers to take Utopia.[7]

The X-Men and Avengers wage a bitter battle for the island. Wolverine sneaks off in the melee and finds Hope. He prepares to kill her, as he had promised, when she burns him with the power of the Phoenix before running off.[8] The X-Men fake a surrender before teleporting away. Rachel Summers, using Cerebro, reports that there are five places on Earth that Hope could be. She secretly relays this information to Cyclops as well.

Most of Wolverine's X-Men decide to side with Cyclops against the Avengers, after he visits the school and explains his reasoning. The children of Utopia are taken to the Avengers Academy to be put in protective custody. Initially tense, the two groups begin to get along. The staff becomes nervous when Sebastian Shaw escapes, believing him to be after the children. When three Avengers arrive at the Jean Grey School, battle quickly follows.

In a Quinjet flying high above Antarctica, Captain America confronts Wolverine over his behavior in the battle of Utopia. They fight, and Wolverine is tossed out of the plane.[9] Around the world, the Avengers and X-Men fight: in Latveria,[10] in the Savage Land, in Tabula Rasa,[11] in Wakanda and at Wundagore Mountain. Hope goes to Wolverine for help with a plan.[12]

In space, the away team of Avengers tries multiple times to stop the Phoenix. The Force draws the attention of the Kree. The Minister Marvel uses it to resurrect Mar-vell, hoping to draw it to Hala. Captain Marvel regains control and sacrifices himself again to stop it.[13] However, the Protector then betrays the Avengers to the Supreme Intelligence, capturing a fragment of the Force for the Kree's use. He changes his mind, but the Avengers refuse to forgive him for what he's done.[14]

Thor tries one last time to stop the Force, but only manages to delay it.

The attention of Gladiator, Shi'ar commander, is also drawn. Not only are the Shi'ar long-time foes of the Phoenix, but his son is on Earth. Wolverine helps Hope survive an attack from Shi'ar Death Commandos.[15] They then steal an A.I.M. space shuttle and journey to the Blue Area of the Moon. Wolverine alerts Captain America to the plan, and the Avengers go to the Moon as well. Cyclops, Emma Frost, Namor, Colossus and Magik arrive too, having used Frost's telepathy to learn of the meeting from Cap's thoughts. Suddenly, Thor crashes on the moon. The Phoenix arrives shortly after.

The Avengers and X-Men fight as the Phoenix descends on the Moon. Hope's power increases, and she finds herself unable to control it. Wolverine tries one last time to kill Hope, at her request. Cyclops stops him, stating one last time his belief that Hope is meant to be the Phoenix's host. Iron Man uses a specially designed Phoenix-Killer suit to try to destroy the Force.

At the Avengers Academy, Shaw has no true ill intentions. Instead, he wishes to free the Utopia kids from custody. The Academy staff reluctantly agrees and lets them leave.[16] The Lights return to Utopia, seeking Hope. Instead, they find the prisoner named Unit. He reveals to the Lights that Hope is a Phoenix Messiah, a host which the Phoenix Force would use with her Lights to correct the path of evolution. Having seen a Phoenix Messiah succeed in the past, he wishes to see what happens when one is disadvantaged. Thus, he has the Lights mind-wiped of the encounter.[17]

The Phoenix-Killer seems to live up to its name, at first. However, it instead fractures the Force. Hope rejects it, and it instead possesses the five other X-Men. Now the Phoenix Five, they return to Earth to usher it into a new age. The Avengers are unable to stop them.[18]

The Phoenix Five try to usher in global peace: Pax Utopia. They build a massive new floating island, a new Utopia, for mutantkind. They work to provide power, food and water for all. In front of the U.N., they outlaw war. To achieve this they try to destroy all weapons, though some escape destruction.[19] Cyclops, overwhelmed by his new telepathic powers, takes a sojourn to the moon to regain perspective.[20] The Avengers, however, do not trust the Phoenix Five. They believe that at any point they could go Dark Phoenix, and wish to have a solution to that potential problem. To do so, they wish to study the intended host of the Phoenix: Hope.[21]

To that end, they orchestrate an invasion of Utopia. Cyclops and Emma Frost confront them and defeat them easily. Iron Fist discovers he has a strange ability to stop the energies of the Phoenix, but is defeated by Cyclops' force blasts. The Scarlet Witch arrives, wishing to avert a dark future she predicted. She teleports the Avengers and Hope off of Utopia. Cyclops is outraged, and decides that the Avengers have been enablers of anti-mutant feelings. Thus, he makes a decree: No more Avengers.

Hope is taken to K'un-Lun. The Iron Fist tells her of Fongji, an Iron Fist who was a host of the Phoenix. Spider-Man teaches her Uncle Ben's old mantra of "With great power comes great responsibility".[22] Meanwhile, Mister Sinister has built himself a city in the Moloid caverns. He fills this Sinister London with his race of Sinisters, but also keeps a populations of clones of X-Men, planning on using them to fight the Phoenix Five. Most importantly, he has a host of Jean Grey clones, Madelyne Pryor spares. He plans to use these to host the Phoenix Force for his own designs.[23]

During a confrontation between the Avengers and the X-Men, the Scarlet Witch injures Magik, while Emma Frost severely burns Hawkeye. As the Phoenix Five heal Hawkeye, Cyclops reprimands them for their use of excessive force, but Magik defends that they must kill the Scarlet Witch and Namor reminds him that they are at war. In Wakanda, Hope tells the Avengers that the X-Men fear the Scarlet Witch. Meanwhile, Iron Man and Black Panther research a way to stop the Phoenix Five and Iron Fist brings Lei Kung to take Hope to K'un-L'un for training. As both teams keep fighting and taking prisoners around the world, Scarlet Witch injures Namor. Furious, Namor goes against Cyclops's orders and leads the Atlanteans into war against Wakanda.

As Namor attacks Wakanda, Iron Man takes Lei Kung to join Wolverine and Hope in K'un-L'un. Captain America then assembles every Avenger he can muster and manages to take down Namor in a hard fought confrontation. Meanwhile, Magneto informs Cyclops of Namor's assault on Wakanda. As the remaining Phoenix Five members arrive in Wakanda, Namor's portion of the Phoenix abandons him and divides itself among Cyclops, Emma Frost, Magik and Colossus. The Avengers retreat to K'un-L'un, as Professor X demands that Cyclops cease the Phoenix Five's actions or he will bring them down.

As days pass by, more and more Avengers are captured by the Phoenix Five, and Hope's training in K'un-L'un shows no results. Several X-Men feel uncomfortable about the way the Phoenix Five are treating their prisoners. Storm arrives in Wakanda in the aftermath of Namor's assault and tells Black Panther that the captured Avengers are being held prisoner in a volcano in Siberia. The Avengers then lead a rescue mission with the help of Storm and Professor X to break out their comrades but are stopped by Magik and Colossus. Spider-Man baits Magik and Colossus into taking each other out, allowing the Avengers to escape. As the Avengers arrive back in K'un-L'un, they are surprised by Cyclops, strengthened by half of Magik and Colossus's portions of the Phoenix force.[24]

He made quick work of anyone that opposed him but was defeated by Hope who in an act of desperation combined the powers of the Iron Fist, Scarlet Witch's chaos magic and Shao-Lao's flames to teleport Cyclops to the Moon. The Avengers then teamed up with several X-Men who had realized that Cyclops and Emma had completely lost control. Together they attacked Cyclops and Emma and gained the upper hand until Cyclops was forced to take the final piece of the Phoenix from Emma, making him the sole host. The complete Phoenix proved too much and finally turned him into Dark Phoenix.[25]

The Avengers fight Summers around the world with the help of the X-Men and Nova, as well as trying to contain the chaos the gigantic force produced around Earth, but who finally managed to defeat him were Scarlet Witch and Hope, the Phoenix left Scott and possessed Hope, but she managed to control it, repairing all the damage Scott caused on the planet, and finally, using the powers of the Scarlet Witch to manipulate reality, she destroyed the Phoenix Force with a final blast of energy which caused millions of people around Earth to manifest mutant powers. Cyclops was finally incarcerated, and Steve accepted the Avengers should've done more to help mutants, and allowed the world to hate them. As a result, he started planning a new team of Avengers in hopes of unifying mutant and humankind.[26]