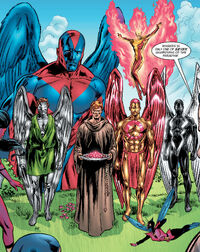 Base of Operations
Paradise
Affiliations

Origin
Following the death of Death, Mar-Vell built a new realm called Paradise, and would charge seven dead heroes into becoming his Avenging Host. Using the High Evolutionary's transmogriphication device to change their dead souls into new forms. They would be responsible to ushering those who admitted they were dead into from the Realm of the Dead to Paradise.

When Mar-Vell killed Death, he intended to build an ideal Paradise that would eventually replace the hellish Realm of the Dead. He would pick a team of heroes to act as defenders of Paradise and also charge them with collecting those in the Realm of the Dead who could admit they were dead into this new Paradise. He chose Steve Rogers, Tony Stark, Henry Pym, Black Bolt, Victor von Doom, the Phoenix Force, and Matthew Murdock to be his defenders. He would transmorgriphy them using a device he collected from Wundagore Mountain, and they would become the Avenging Host. They would bring the dead from the Realm of the Dead to Paradise, and from there they would give the deceased a shard of the Cosmic Cube. Consuming the portion of the cube, the dead would be allowed to create their own ideal paradise reality to live out eternity.[citation needed]

Each member of the Host would be charged with visiting certain souls to see if they were determine if they are ready for Paradise. Captain America was charged with visiting his parents, as well as Frank Castle and his family. While in Paradise, the other members of the Avenging Host would become aware that whenever they added a new soul to Paradise, the realm would expand into the Negative Zone. They would be come further suspicious when Mar-Vell became reclusive and they learn that the realities that are created are simple wish fulfillment.[citation needed]

When Steve Rogers became aware that the Jackal and Jigsaw renounced Paradise to torture Frank Castle and his family in the Realm of the Dead, Cap took the two and banished them to a remote region of the Realm. Murdock would then go to Paradise to beat the Kingpin who also renounced Paradise so that he could lord over those in the Realm. Daredevil would beat Kingpin's assassins and beat him in the only way he could: by taking his wife Vanessa into Paradise.[citation needed]

All this didn't shake Captain America from his goal, and he went to an extreme to try and get everyone in the Realm of the Dead to believe they were dead: by reawakening the memories of Benny Beckley, who used to be the Skull, and use his powers to make everyone in the Realm collectively agree they were dead. However, he was talked out of this plan by Thanos and 4-D Man, and they along with Benny and Comet Man would travel to Paradise.[citation needed]

The current whereabouts of the Avenging Host are presently unknown.

Retrieved from "https://marvel.fandom.com/wiki/Avenging_Host_(Earth-9997)?oldid=5078495"
Community content is available under CC-BY-SA unless otherwise noted.