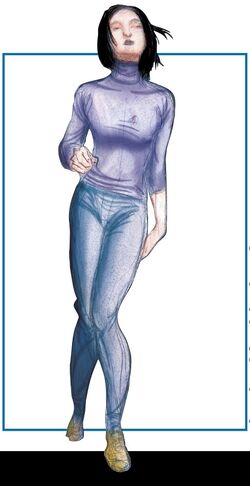 Genetic material was taken from Wolverine during the time he had Adamantium fused to his skeleton. Dr. Daniel Connor and his wife Veronica Connor implanted the DNA into a child Veronica was pregnant with. The resulting child was Avery Connor.

She was designed so that her powers did not activate until a certain age, and so that once she reached maturity, her powers would exceed those of Wolverine himself. At fourteen, she could recover from a gunshot to the chest in a minute or so.[1]

Like this? Let us know!
Retrieved from "https://marvel.fandom.com/wiki/Avery_Connor_(Earth-616)?oldid=5499926"
Community content is available under CC-BY-SA unless otherwise noted.