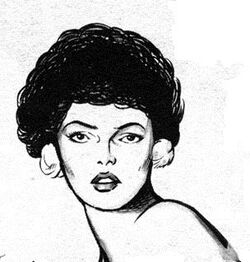 Awilda Ayala was the sister of Hector and Ava Ayala who both became the White Tiger at one time. When Hector first became a hero, Ayala was worried about him, as she mistook his secrecy for a drug problem like their brother Filippo was suffering from and which she was hiding from their mother[1]. When he disappeared, she believed the White Tiger to be responsible, not realizing that they were the same person[2]. She alerted Det. Sgt. D'Angelo who alongside Blackyrd (who was also investigating the White Tiger) confronted the Tiger, who unmasked and revealed himself to be Hector.[3]

Like this? Let us know!
Retrieved from "https://marvel.fandom.com/wiki/Awilda_Ayala_(Earth-616)?oldid=5768075"
Community content is available under CC-BY-SA unless otherwise noted.