View source
For fictional versions of Axel Alonso as a character within comic books and/or other media,
visit this disambiguation page.
Axel Alonso 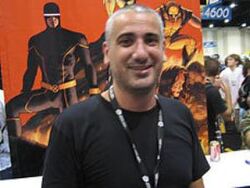 Alonso's father is from Mexico, and his mother is from England. A native of San Francisco, Alonso earned a bachelor's degree in sociology and politics from University of California, Santa Cruz and a master's degree in journalism from Columbia University.

Alonso spent more than a decade as an editor at Marvel, working on some of its most notable characters. In 2001, he began editing The Amazing Spider-Man. He would continue on the title during J. Michael Straczynski's critically acclaimed run on the title, which began in 2003.

In 2002, Alonso, then a senior editor, had lured Frank Cho to Marvel. Alonso approached Cho to revamp the third-string character Shanna the She-Devil, a scantily clad jungle lady. Alonso is also credited with bringing crime writers to work on Marvel titles, such as Duane Swierczynski and Victor Gischler.

He was promoted to Vice President, Executive Editor in early 2010. In July of that year, Alonso and fellow Marvel editor Tom Brevoort began a weekly column on Comic Book Resources called "Marvel T&A", a new installment of which appears every Friday, along with Joe Quesada's "Cup O' Joe" column.

On January 4, 2011, Alonso was named Editor-in-Chief of Marvel Comics, replacing Joe Quesada, who was named Chief Creative Officer the previous June. In attaining the position of Editor-in-Chief, he became only the third person in 15 years to hold the position, and one of the few in the company’s history to gain it "without tumult or corporate bloodshed".

On November 17, 2017, it was announced that Alonso mutually parted ways with Marvel Comics. He was succeeded by C.B. Cebulski as Editor-in-Chief.[2]