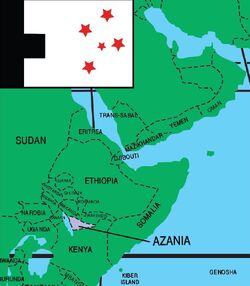 Azania, officially Republic of Azania is a country located in Eastern Africa and bordering the sovereign nation of Wakanda. Azania was widely recognized as an aggressive nation, notably due to it's staunch Apartheid government and rigid policies. It's capital city is Fischerstadt.[1]

One man, a political prisoner, inherited the spirit of the Panther Totem, and transformed into a savage were-creature. He escaped from custody after mauling two prison guards and continued to leave a trail of bodies across the country, concentrating on key figures of power. His victims included real estate developers, the clergy, and even the governor. In response, military leader General Magnus Moorecx formed a superhuman team known as the Supremacists, and publicly accused the nation of Wakanda of supporting the rebel cause.[2]

Like this? Let us know!
Retrieved from "https://marvel.fandom.com/wiki/Azania?oldid=5857446"
Community content is available under CC-BY-SA unless otherwise noted.