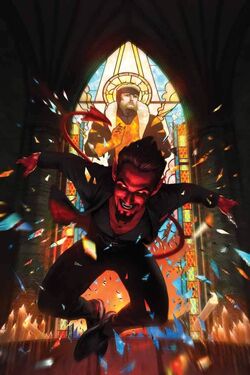 Never confuse a physical passion for a condition of the heart, my dear. Since the dawn of mankind, the two have rarely gone hand in hand. Now go back to the Baron, stay safe and warm in the cozy, comfortable, protected little world you've married into, and raise our child--my child--as his.

Azazel claimed he was one of the oldest mutants, part of a group of demonic-looking mutants called the Neyaphem. He even claimed that he once battled Mephisto and others for the title of "Satan". The Neyaphem were eventually banished to the Brimstone Dimension by another group of mutants with angelic appearances, the Cheyarafim. Azazel seemed convinced that Angel (Warren Worthington III) was a modern member of that group.[citation needed]

He has been known to make demonic deals with various humans throughout history, including the family of Monet St. Croix.[3]

Their leader, Azazel, was the only one who was able to breach the dimensional void and return to Earth for brief periods of time due to his teleportation powers. His only hope to return to Earth permanently was by impregnating women, as his children were linked to his dimension and he could use them to create a stable gateway between dimensions. About twenty years ago, Azazel began mating with women who had strange appearances, at least with looks and abilities other women didn't have. He met Mystique in Germany, when she was married to a rich castle lord named Baron Christian Wagner. With Christian unable to give her children, Mystique was introduced to Azazel, whom Christian knew as a business partner. Mystique had secretly been taking lovers to produce an heir to Count Wagner. Mystique fell in love with Azazel, and although she was hesitant to betray Christian as she still loved him, she gave in to Azazel and they made love. Not much later, Mystique was pregnant with Nightcrawler; soon afterward, she killed Christian because he suspected her betrayal. She had gone looking for Azazel, but he was nowhere to be found. It was later known that Azazel was taking care of business involving the Cheyarafim, and had to leave, knowing that Mystique would find some way to live. However, she didn't have much time to formulate a plan, as the angry villagers soon found out about Christian's murder and came after her and the demonic-looking baby. In order to save her own life, she shape-shifted into one of the villagers and dropped Nightcrawler over the cliff, saying that she had pushed the woman off as well. With her own life saved, she ran away. Mystique was the only woman that Azazel sought to have relations with besides simple procreation.[citation needed]

They were all mysteriously called to gather and sacrifice themselves on the island known as the Isla Des Demonas to open a portal and bring his army to Earth, with the goal of destroying both the Cheyarafim and what Azazel called "normal mutants", mutants whose bodies did not show signs of their mutation, and who were not seen as monsters and demons. In addition to Nightcrawler, another son of Azazel's was the Genoshan called Abyss. The children of Azazel all joined each other in a zombie-like state and opened a portal to his dimension. A group of X-Men had followed Kurt to see where he was going, and jumped into the portal once it had opened. Once inside, Azazel took great pleasure in toying with the team, having them believe that he was actually Satan.[citation needed]

In the end, the X-Men defeated Azazel and his army and banished him to an unknown oblivion. The X-Men, including Nightcrawler, were able to escape, along with two other children of Azazel: Abyss and Kiwi Black.

Azazel's whereabouts were unknown for several years, but he resurfaced in this dimension, accompanied by a few Azazel-like Bamfs, revealing himself to be the master of Calcabrina, former ally of Frankenstein's Monster, and banned from all realms of Hell.

Azazel was confronted by a shape-shifted Mystique (who he easily recognized), looking for his assistance with going to a realm of Hell to fight the newly resurrected demonic William Stryker with Weapon X-Force hiding in the background. Sabretooth, seeing that he was just flirting and she wasn't getting anywhere, urged the rest of the team to come out of hiding and attack Azazel, to force him to transport them to the Hell Stryker resided in. Easily defeating the team, he then obliged their request once he remembered how Mystique sired a child with another man, Sabretooth, that wasn't him. He swiftly delivered a blow to Sabretooth, by slicing his head clean off with his sabre, sending him to the correct realm of Hell first, ruled by Marduk Kurios, then followed by the rest of the team.[4][3]

With the whole team being sinners and killers designated for eternal damnation, he "killed" Weapon X-Force despite their potent regenerative healing factors. In reality, he was keeping their bodies in suspended animation through his teleportation power, freezing them in time and space, and allowing their souls to go to Hell. Since their bodies were frozen, their healing factors didn't kick in and revive them until after Azazel unfroze them when they were done in Hell.[5]

Azazel was eventually welcomed to the new mutant island of Krakoa, created by Xavier, Magneto, and Moira X. He entered through the teleportation gateway alongside other villainous and fractious mutants, who had been invited to join the nation in order to heal mutantdom and start over as a whole species together.[6]

Azazel displayed a number of super-human and magical abilities; He was stated to be the world's most powerful teleporter.[7][4]

He is also a master swordsman with a somewhat twisted code of honor and ethics.

Like this? Let us know!
Retrieved from "https://marvel.fandom.com/wiki/Azazel_(Earth-616)?oldid=6099938"
Community content is available under CC-BY-SA unless otherwise noted.