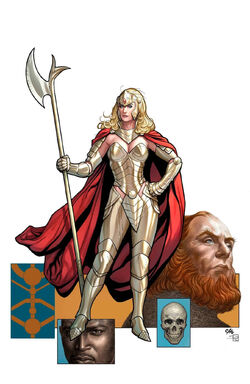 Our tasks is to unite all our species in an effort to deal peacefully with the Space-Gods!

Born during the Pleistocene, Azura figured early that Eternals had no purpose fighting among themselves.[8]

Her father Zuras had her name changed to Thena resembling that of Zeus' daughter Athena to seal the treaty between their two peoples. Due to this, she has often been mistaken for Athena. The city of Athens was apparently built for her, not the goddess, although Thena later allowed it to be conquered by the Spartans in 404 B.C.[9]

She encountered the Deviant Kro in Babylon 2,500 years ago. He had a chance to slay her, but did not; as the years passed, the two of them grew closer together. Thena and Kro made love during the Vietnam War, resulting in Thena becoming pregnant with twins. She placed them inside of Ms. Ritter, an infertile woman, who raised them as her own twin children, Donald and Deborah.[9]

When Kro led his armies in an attack on New York after the arrival of the Fourth Host of Celestials, Thena opposed him[10]. After Kro called a truce, she decided to reveal their races' existence to humanity via Professor Samuel Holden[11]. Kro showed her Ransak the Reject, a genetically stable Deviant. Thena was convinced by the Deviant Karkas to grant both of them sanctuary. After Zuras' death & the subsequent departure of most of Earth's Eternals, Thena became Prime Eternal, but she was traumatized by her father's death and was being subtly influenced by a Brain-Mine Kro had placed upon her. She turned against Ikaris to help save Kro's life, but later relinquished her title to Ikaris. When she learned of the Brain-Mine, she was furious with Kro, but has since forgiven him.[6]

Like Sersi and Makkari, she was affected by Sprite's reality warping to have no memory of her past as an Eternal. Thena was married to Thomas Eliot, with a son named Joey, and was employed as a researcher at Stark Enterprises.[12]

After being released from a hostage situation by Iron Man, she regained her costume and powers. Following the awakening of the Dreaming Celestial, Thena had a heated argument with Zuras over keeping her son, as he is born a mortal, which the outcome comes in favor for her as she swears that she will continue to love and parent Joey until his death at old age.[13]

When the countless bodies of Celestials rained down on the Earth to herald the arrival of the Dark Celestials, the Eternals learned a dark truth that drove them mad: that the true purpose of their kind was to cultivate humankind, since the First Host of Celestials allowed humanity to thrive because they saw in their genetic makeup the potential to act as antibodies against the Horde. In their madness, the Eternals either turned against each other or committed suicide, including Azura.[14]

She was later resurrected along with her fellows Eternals.[15]

Thena is an Eternal, who is capable of manipulating cosmic energy for a variety of purposes. As well as possessing skills which were learned over the course of millennia of living.

Thena was an excellent hand-to-hand combatant with knowledge of combat methods and weaponry used during various periods in Earth's history.

Thena's seeming immortality, like that of other Earth born Eternals, depended upon the mental control her maintained over her bodily molecules. If an Eternal's control is broken and suffers a fatal injury during that time, he or she will not be able to heal from it.

Teleportation, although doing so with her own power is unpleasant.

Like this? Let us know!
Retrieved from "https://marvel.fandom.com/wiki/Azura_(Earth-616)?oldid=6549482"
Community content is available under CC-BY-SA unless otherwise noted.