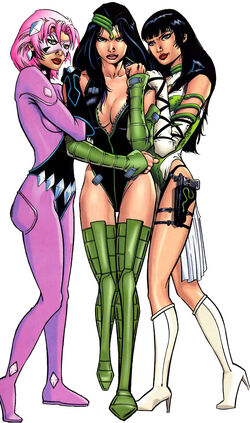 The Asp, Black Mamba, and Diamondback were close friends as well as founding members of Sidewinder's super-villain team, the Serpent Society.

When Diamondback began secretly dating the hero Captain America, otherwise known as Steve Rogers, the others acted behind the scenes to make sure that her first real date was uneventful. After learning of Diamondback and Cap's relationship, the Society's new leader, King Cobra, had Diamondback kidnapped and placed on trial, fearing that she would reveal the group's secrets to the Captain. Diamondback was found guilty by the majority of her fellow Serpents, and sentenced to execution. Black Mamba and Asp objected, but were overruled by King Cobra. To save Diamondback, Black Mamba and Asp called in a favor from their former leader, Sidewinder (who was also Black Mamba's ex-boyfriend), and he rescued Diamondback. However, in retaliation, King Cobra captured the Asp and Black Mamba. Diamondback then hired the mercenary Paladin to help her free the pair. Together, with Captain America, and Paladin, the five combined to defeat the Serpent Society.

Fearing retaliation from the Society, Diamondback suggested they form their own group, B.A.D. Girls, Inc., the "B", "A", and "D" being the initials of their combined codenames. Later, the remaining Serpent Society members captured Diamondback, however, M.O.D.A.M. intervened and kidnapped their former teammate Anaconda and all three B.A.D Girls to enlist them for Superia's army of Femizons. While on Superia's cruise ship, Asp and Mamba befriended Zambian criminal javelin expert Impala, while Diamondback was attacked and almost killed by her old rival Snapdragon. Traumatized, Diamondback decided to quit adventuring, and the team were rescued by Captain America and Paladin who once again joined forces with them to defeat Superia and her Femizons. After the battle, Captain America offered to clear their names, but the girls declined. When Mamba pulled the image of Diamondback's greatest fear from her, which was Snapdragon, Diamondback quit the group in anger. Black Mamba and Asp decided to investigate, seeking out Snapdragon.

In New York's Bar With No Name, the pair were attacked by Battleaxe, Steel Wind, and Golddigger, who were seeking the bounty Superia had placed on their heads. Impala came to their rescue and joined B.A.D. Girls Inc.,replacing Diamondback.

Diamondback regained her confidence and she contacted her friends and their group remained intermittently active. Diamondback worked for S.H.I.E.L.D., while the Asp and Black Mamba both freelanced. Mamba briefly worked for Justine Hammer against the Thunderbolts.

Some time later, Asp and Mamba rejoined the Serpent Society when they were hunting what King Cobra believed to be Diamondback, but who turned out to be a LMD. The founding B.A.D. Girls later reunited when Cable anonymously hired them to steal a new computer hard drive from the Dominus Corporation. After battling Deadpool for the technology, they determined that it had already been stolen by Cat, and confronted him in Hong Kong. Aiding Deadpool against an army of Makeshift and Rive clones, they completed their contract, and the trio went their separate ways until their next hire.

During the superhero Civil War over the Super Human Registration Act, the B.A.D. Girls opposed it, and joined up with Captain America's Secret Avengers.

Over time, the market for "do-gooder" mercenaries turned out to be scarce, with an already crowded supply. This predicament led to the dissolution of B.A.D. Girls.[1]

Like this? Let us know!
Retrieved from "https://marvel.fandom.com/wiki/B.A.D._Girls,_Inc._(Earth-616)?oldid=6379138"
Community content is available under CC-BY-SA unless otherwise noted.