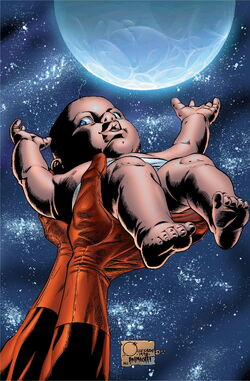 Gwyneth fled with her infant from men who pursued them. Believing she'd seen angels in a vision, Gwyneth delivered the baby to Matt Murdock, claiming the baby was the newborn messiah and that Murdock was to take care of her.[1]
Murdock delivered the baby to the Black Widow, leaving her in the heroine's care for a time. When Black Widow tried returning the baby to Daredevil, he tossed the baby off a roof to kill it, under the influence of a strange drug. Black Widow rescued the baby and took it into her care.[2]
Black Widow took the baby to confront Daredevil who, in a hallucination, knocked Black Widow out and took the infant. He leapt from the roof with the baby, intending to kill them both, and saved them both at the last possible second. He took her to Clinton Mission Shelter, where Sister Maggie took care of the baby over the following days.[3]
Bullseye attacked the Shelter, killing and wounding all the nuns and homeless there, including Sister Theresa and Sister Anne. Sister Maggie managed to keep the baby hidden however. Daredevil battled Bullseye as Sister Maggie and Karen Page worked to protect the baby. Bullseye ended up killing Karen and kidnapping the baby, who he turned over to Mysterio.[4]
Mysterio placed the baby in a sound proof room with low oxygen so that Daredevil couldn't find her. Daredevil managed to rescue the baby, who didn't make a sound when Mysterio fired a gun to kill himself.[5]
The baby was turned over to the hospital and child services became involved. She was adopted out to a family in New Jersey after Matt gave her the name Karen, in honor of the deceased Karen Page.[6]

Daredevil was recruited by Stone on a mission to prevent The Hand from getting their hands on a baby believed to have the reincarnated soul of an ancient legendary Japanese hero. Stone explained that The Seven had fought The Hand over the soul of that hero since the beginning of their order, and that the last incarnation had been their master, Stick. Daredevil helped fight off the Hand, but Stone and his allies vanished. Unbeknownst to Daredevil, they adopted baby Karen, believed to be the latest incarnation, after the New Jersey couple had mysteriously backed out of the adoption agreement at the last minute.

Like this? Let us know!
Retrieved from "https://marvel.fandom.com/wiki/Baby_Karen_(Earth-616)?oldid=6030083"
Community content is available under CC-BY-SA unless otherwise noted.