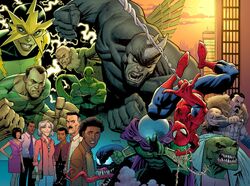 Official Name
Back to Basics

Hard times for Spider-Man: the mayor Kingpin pretending to be his supporter, managed to put him against the whole superhero community. Hard times for Peter Parker: accused of having plagiarized the doctoral thesis, from that of Otto Octavius (who had made it for him when he had seized his body) is fired by the Daily Bugle. As if that wasn't enough, he has to share the apartment with Boomerang and finds himself divided into two separate entities due to a laboratory accident, and he has to come back together. On the other hand, however, he seems to be able to start his relationship with Mary Jane again.

Retrieved from "https://marvel.fandom.com/wiki/Back_to_Basics_(Story_Arc)?oldid=5356560"
Community content is available under CC-BY-SA unless otherwise noted.