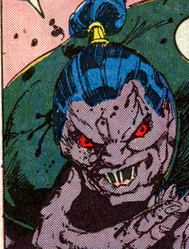 Bahkt was an old ally of Conan, turned enemy deranged by indulging in the potentially deadly drug Black Lotus. Leader of a bandit gang in Koth, Bahkt kidnapped Kobe and lured the Cimmerian into his forest hideout. As a freak sunburst abruptly occured in the middle of the night while they were battling, Bahkt escaped and Conan's second in command Shapur rescued Kobe.[1]

Bahkt was then approached by the Devourer of Souls, who gave him the power to consume the souls of men.[2]

Bahkt then began looking for Conan to steal his soul and fought Anneka, Kaleb and Kobe, until he kidnapped Red Sonja to lure the Cimmerian.[3]

After having captured and abused the Hyrkanian warrior, Bakht left Sonja to be discovered by Conan's agents and returned to the Devourer of Souls, demanding more souls. With demonic power and the strength of ten man, Bahkt lured and attacked Conan in the Forest of the Eternal Verities, but he was eventually killed by the Cimmerian.[4]

Like this? Let us know!
Retrieved from "https://marvel.fandom.com/wiki/Bahkt_(Earth-616)?oldid=5362672"
Community content is available under CC-BY-SA unless otherwise noted.