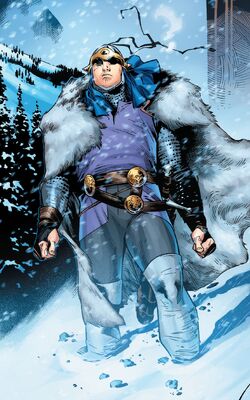 For ASGAAAARD! Fall ye back ---- before the blade of Balder!

Balder the Brave was one of the Asgardians, an extra-dimensional race of beings once worshiped by the Vikings and Germans, as well as half-brother and close friend to Thor. Due to prophecies that Balder's death would help trigger the coming of Ragnarok, the destruction of Asgard and its inhabitants, Odin, ruler of Asgard, commanded his wife Frigga to make Balder invulnerable to harm.[citation needed]

Before he allowed her to cast the spells, however, he accused Balder of treason, because during a battle with the Storm Giants, he had deserted the fight to put a bird who had fallen from its nest, back with its mother. Odin ordered his brothers Tyr and Honir to shoot arrows and throw lances at Balder, but the projectiles were stopped by an eagle and a plant. Seeing that Balder did not flinch, Odin was content that Balder was the bravest in all of Asgard and decided to grant him the invulnerability.[7]

Frigga cast spells that would protect Balder from harm by any living or inanimate thing while he was in the Asgardian dimension; however, Balder remained vulnerable to mistletoe. Loki, the god of mischief, learned of the prophecies and vulnerability,[8] and tricked the blind god Hoder into firing an arrow tipped with mistletoe wood at Balder. Odin prevented Balder from actually dying, but when he was finally restored to life, his hair had turned white as a result from his experiences in Hel. Later, Balder's beloved, Nanna, sacrificed herself to save Balder from entrapment in marriage to Karnilla, and Balder was so distraught that he resolved never to speak of this incident or of her again.[9]

These experiences of death led Balder to forswear the life of a warrior and tried to forget his misery through eating, growing considerably fat. He rode to the desert to die, but encountered the Norns, three goddesses who oversaw the workings of destiny. The Norns gave Balder a vision that restored his faith, and he rode back to Asgard, eventually losing his excessive weight as he became a warrior again.[citation needed]

Balder fought in many of Asgard's subsequent battles, including one against the demon Surtur, in which he needed to seek out the aid of the sorceress Karnilla. During a time when Odin had departed Asgard, Balder became the ruler of Asgard. Balder was killed during the final Ragnarok by an army wielding mistletoe-tipped spears.[citation needed]

Balder's spirit was pushed into the Destroyer by Loki and attacked Thor who was searching for the missing Asgardians. He was restored by Thor along with Loki and resided in Asgard Oklahoma. Balder replaced Thor as Lord of Asgard due to the sinister plans of Loki during the Dark Reign, and was convinced to move the Asgardians to Latveria, the domain of Doctor Doom, where they were placed at his mercy. Until the prompt arrival of Thor who brutally bested Dr. Doom's Destroyer freeing the Asgardians held prisoner including Balder. Once again ruler of Asgard yet broken in spirit Balder attempted to abdicate the throne. Thor convinced him not to. When the threat of the world eaters ensued over the nine realms Balder did not pursue any action despite the encroaching threat. Forcing Thor to resurrect Odin after which Balder departed Asgard with Tyr. Intent on dying a warrior's death to atone for the sins of failing to protect Asgard. Defeating many of the world eaters including Thane the prince of the Ano-Athnox before falling to their deaths.[10] After the defeat and banishment of the Athnox to the Limbo in the World Tree, Balder's vengeful spirit was present along with Tyr.[11]

In Limbo, Balder's spirit became the leader of a group of fallen warriors sent by Hela to patrol the realm to keep its bestial inhabitants in check and prevent them from rising up. Balder's patrol served the additional purpose to deny one particular inhabitant of Limbo of prey: Surtur, the fire demon who grew in power by consuming its demon-kin.[12] Balder left Limbo for a short while in order to interrupt a trial Thor was put on by Odin himself and speak in his brother's defense.[13] Near the end of the entire universe as a consequence of the multiversal phenomena known as incursions, the King Loki of a possible future approached Hela in Hel to convince her to unleash Jormungand's spirit and trigger a new Ragnarok. Balder attempted to interrupt the alliance, but King Loki decapitated him.[14]

When Odin's secret long-lost firstborn Angela set her sights on overthrowing Hela, Balder joined forces with Tyr and Skurge the Executioner in an attempt to quelch the rebellion,[15] but they failed and were defeated.[16] Angela became the new Queen of Hel after defeating Hela in combat. However, since she only wanted to use that power to set free the spirit of her lover Sera, she abdicated as soon as her true goal was achieved. She handed over the crown to Balder, and he became Hel's new regent.[17]

Not long afterwards, Niffleheim became the target of Muspelheim's new ruler, Sindr the Queen of Cinders, as part of an alliance between her realm and Malekith the Accursed during the War of the Realms. In the middle of the conflict, Balder reunited with his lover, Karnilla, whose spirit was transported to Niffleheim after dying a victim of the War of the Realms.[2] The war marched on, and Balder's forces were overpowered. Balder reunited with his brothers Thor and Loki, who teleported to Niffleheim to put an end to Malekith's plans. Tyr tricked Balder and his allies into liberating Hela, who was being returned to Hel as a prisoner of the Queen of Cinders.[18]

Loki convinced Balder and Hela to marry despite their enmity for tactical purposes to unite the realm against Sindr. The ceremony was interrupted by Thanos, with whom Hela had been allied once,[19] but he made an appearance solely to cut his ties with her and leave. Sindr's forces attacked, and Balder was defeated by Gar-Toom, one of Niffleheim's chieftains who had decided to pledge allegiance to Sindr. The cavalry arrived in the form of the Einherjar and the Valkyrior, whom Thor had gone to recruit in the meantime. Thor successfully forced Sindr and her forces to retreat back to Muspelheim. With the threat averted, Hela refused to continue the ceremony, arguing that Balder never got to say his vows. Having stolen Balder's wedding ring from him, Karnilla slid it in her finger and said "I do" in his place, sealing the marriage to spare Balder of the sacrifice. Karnilla subsequently requested Loki's aid in order to return Balder to the land of the living.[20]

When the War of the Realms reached Midgard, Balder was tasked by Freyja to protect his infant sister Laussa. To this end, Balder assembled a team of Midgardian warriors nicknamed the "Babysitters Club," and went on a road trip to evade Sindr's accomplice Ares.[21] Out of instinct, Laussa used her powers of subconscious manipulation to have her guardians stop at certain points where they could find potential allies for her to influence, thus gathering an army to fight the war.[22] These people were a group of Skrull deserters living in an RV campground,[23] a band of Western ghosts summoned by the Demon Rider on Laussa's behalf,[24] and the attendees of a convention for henchmen in Nevada.[25] The final ally recruited by Laussa was Ares himself, who was guided to the baby's protectors by the Demon Rider impersonating Sindr. After Ares accepted to follow the child's will, the babysitters took their new allies to the War of the Realm's final battle.[22] Following Malekith's defeat and the end of the War of the Realms, Balder joined the League of Realms.[26]

Asgardian Physiology: Balder possesses all of the various superhuman attributes common among the Asgardians.

Danger Sense: While in Asgard, Balder was able to sense when Thor was in danger on Earth.[27]

Photokinesis: Being the Asgardian God of Light, Balder can generate an intense beam of light that is strong and hot enough to melt the fortress of Utgard-Loki and the Frost Giants within it down to small sizes.[28]

Teleportation: Balder is able to teleport himself to Earth from Asgard.[29]

Animal Communication: Balder has the ability to communicate with the animals he is charged to protect.[30]

Energy Projection: Balder has limited energy and magical abilities. He has shielded himself from mortal eyes when he flew to Earth on Odin's behalf to find Thor,[30] He can create an enchanted fog to transport Thor from Earth to the Bifrost Bridge.[31]

Allspeak: Thanks to the Allspeak Asgardians can communicate in all of the languages of the Nine Realms, Earth's dialects, and various alien languages.

Superhuman class 50. Balder is significantly stronger than the average Asgardian and can lift 35 tons.[32] However he may be stronger now as he is the king of Asgard and is also said to be able to lift 50 tons in his latest OHOTMU entry.[6]

Balder is vulnerable to weapons made of mistletoe; can die of natural means (such as severe lack of food, water or air); according to Loki as he warned Balder after helping him slay a Frost Giant on Midgard as part of a ploy to gain his trust, the spells of invulnerability no longer shield him beyond the boundaries of the now-lost Asgardian dimension and he can be far more easily slain, even by mortal weapons.

Once wielded the Norn stones.

Pair of swords.
Svraden: An Odin-blessed sword that Balder can summon from Earth across the Nine Realms to where he stands in Asgard,[33] and transport other beings to other realms.[34]

Like this? Let us know!
Retrieved from "https://marvel.fandom.com/wiki/Balder_Odinson_(Earth-616)?oldid=6509984"
Community content is available under CC-BY-SA unless otherwise noted.