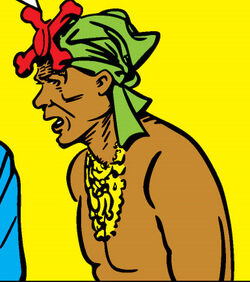 Balus was a tribal leader who would kidnap Anna Twisdon, daughter of Lord Twisdon, to make her his peoples "white goddess". Forcing her to comply through hypnosis, Balus would face Dakor the Magician, a friend of the Twisdons, who had come to rescue Anna from his clutches. Although Balus would have Dakor tossed into the Pool of Nordu (which would nullify the heroes powers) and have him tossed into a raging fire, Dakor would save himself when the heat from the flames would evaporate the water. In their final clash, Balus would be tossed into the blaze and burn alive. Upon Balus' death, Anna would be freed from his control and returned to her father.

Hypnosis: Balus had the power of hypnosis

Balus armed himself with a spear.

Like this? Let us know!
Retrieved from "https://marvel.fandom.com/wiki/Balus_(Earth-616)?oldid=6447425"
Community content is available under CC-BY-SA unless otherwise noted.