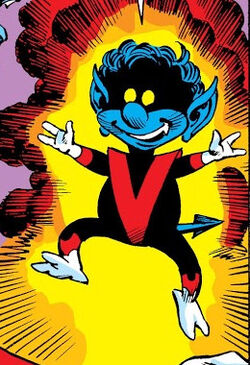 I'm up to my navel in little blue geeks!

Several years ago, one of the Bamfs came upon a group of adventurers led by a spunky teenage pirate named Kitty Pryde. Kitty and her allies sought to save the life of an enchanted princess named, Jean Grey, who had succumbed to the corruptive influence of her darker passions. This malevolent personality caused her to evolve into an evil entity known as Dark Phoenix. Thrilled at the promise of high adventure, the Bamf agreed to aid Captain Kitty on her quest. Calling upon several more Bamfs, they proved to be a valuable asset insofar as their ability to distract Dark Phoenix's aggressive attacks, allowing a wizard named Xavier the chance to stop Dark Phoenix's rampage once and for all. [1]

Some time later, an alien sorcerer from another dimension named Shagreen arrived on the Bamfs' home world and sought to subjugate the Bamf population. He captured dozens of female Bamfs and imprisoned them inside of a dungeon at the Fangs of Doom. He further apprehended many male Bamfs and used his dark magic to fuse them into an evil composite being known as Dark Bamf. [2]

A mutant super-hero from Earth-616 known as Nightcrawler arrived in this fairy tale world and met with the surviving Bamf community. Recognizing that Nightcrawler appeared as an extremely tall Bamf, they instantly regarded him as a father figure and even took to calling him "daddy". Nightcrawler had faced the wizard, Shagreen once before and volunteered to aid the Bamfs in rescuing their captured brethren. He met up with Captain Kitty and her allies and laid siege to Shagreen's sanctuary in the Fangs of Doom. Shagreen ordered his Dark Bamf to take them down, but the corrupted Bamf provided little opposition against Nightcrawler's efforts. Nightcrawler defeated Shagreen by destroying his magic-staff. As the mystical energy dissipated, all of its conjoined effects ceased to exist. Dark Bamf separated back into normal male Bamfs, who subsequently reunited with their female counterparts. [2]

Teleportation: All Bamfs possess the natural ability of teleportation. A Bamf can teleport by displacing himself into the Brimstone Dimension, travel through it, and then returning to the original dimension at a certain distance from the point of departure. When they disappear in teleporting, Bamfs leaves behind smoke with a stench reminiscent of burning brimstone. This is a small portion of the atmosphere of the Brimstone Dimension that escapes while the aperture is open. Their teleportation is invariably accompanied by the muffled sound of imploding air rushing to fill the vacuum left where their body was. The mechanics of their tele-location abilities is similar to that of Nightcrawler, however with subtle differences. As Bamfs are not mutants, their power is derived through a natural magical process inherent in all members of their species.

Micro-Suction Discs: Bamfs, much like Nightcrawler, can stick to objects with the surface of their hands and feet. This enables them to scale surfaces.

Prehensile Tail: Bamfs posses tail which allow them to grab onto objects with relative ease. Their tails are at least strong enough support their own body weight (between 19 and 101 lbs) and are deft enough to fight with like a sword or blunt object.

Bamfs are not particularly strong creatures due to their small frame.

Bamfs exist in an environment with a gravity similar to that of Earth (0.997 32g).

The Bamfs do not maintain any recognizable system of government.

The Bamfs are a carefree and fun-loving species, who live in small puffball houses and yearn for nothing more than frolicking about the countryside playing with the creatures of the forest. Male Bamfs possess a particularly strong libido and concentrate the bulk of their energy on courting their taller, more reserved female counterparts. Female Bamfs are likewise sensually motivated by members of the opposite sex, but tend to reign in their sexual appetites when in the company of their promiscuous potential mates.

None; All Bamfs are referred to as "Bamf" and do not possess proper names.

Like this? Let us know!
Retrieved from "https://marvel.fandom.com/wiki/Bamf_(Race)?oldid=5497795"
Community content is available under CC-BY-SA unless otherwise noted.