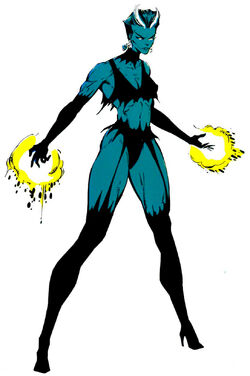 Halflife was an alien from an unknown race, Halflife possessed powers related to the "Weak Force". It was unknwown if this an an inante ability of her race or a power she developed from alternative means. She viciously murdered every other living being in her birthworld under unknown circumstances.[6]

Halflife then received an open message broadcast in a light alteration by Earthling supercriminal Graviton, whose powers were related to gravity, one of the four fundamental forces in the universe. Graviton wanted to create a group of conquering villains based on each of the four forces,[5] and Halflife exemplified one of those, the destructive attraction between matter and anti-matter. Halflife answered the call and traveled to Earth via unknown means.[6]

Halflife appeared within a nuclear reactor of the Horseham Nuclear Power Plant, in Diablo Canyon, California. Unaffected by radiation, she melted the walls to the surprise of radiation suit-wearing auditing technicians witnessing it. Halflife murdered these men simply by touching their suits and then went through some high-voltage lines. Halflife met with the intelligent electromagnetic entity Zzzax, a supervillain native to Earth and the pair walked southward toward Los Angeles to meet Graviton.[7]

Graviton had already recruited the representative of the strong force, Quantum, a Dakkamite alien soldier who had submitted to a power-endowing process and was looking for his fellow troopers; he agreed to cooperate with Graviton in exchange for the latter's help in his own quest.[1][8] Graviton also recruited Halflife as the and Zzzax as the exemplification of electromagnetism.The Fundamental Forces agreed to cooperate in villainous ventures and to help Graviton in his conflict with local based superhero team, Avengers West Coast.[6]

While Graviton went solo to capture Avenger Tigra,[6] Halflife, Quantum and Zzzax were sent on a mission to destroy the other West Coast Avengers. To do so, they raided Sunset Boulevard in Los Angeles: Hovering, burning Quantum issued an alien challenge that LAPD passed on to the Avengers and, when the passer-by tried to escape Quantum, Halflife, and Zzzax attacked them. Halflife expressed her interest in "feasting" on the locals.[7]

The Quinjet-piloting Avengers appeared only seven minutes later. Land-based Avengers Hawkeye and Mockingbird confronted Halflife and Zzzax; as Hawkeye had already fought Zzzax in the past, they confronted again. Mockingbird criticized Halflife's choice in clothes before fighting; Halflife simply reprimanded her on being too loud and touched her once, making her grow old in a moment. She then repeated the process, with Mockingbird aging quickly every time. Armored Avenger Iron Man intruded the fight, hoping that his armor would protect him from the effect, but he discovered that Halflife's touch also affected him.[7]

Meanwhile, Hawkeye and fellow Avenger Wonder Man defeated Zzzax. Wonder Man then decided that Halflife was a greater threat than Quantum, as she could defeat an Avenger with a single attack. Wonder Man then grabbed Halflife and, using his jetpack, flew away with her. Halflife tried to age Wonder Man, but he happened to be made of ionic energy, which cannot age. This allowed Wonder Man to knock Halflife down with a punch and, as soon as she was out cold, both Iron Man and Mockingbird recovered their lost age.[7]

The Avengers defeated Quantum soon afterward, with Iron Man deducing that their enemies represented three fundamental forces. Then, Graviton came with Tigra already captured,[7] and he easily defeated the standing heroes. He moved his prisoners and allies to his headquarters, a massive chunk of rock hovering ten miles over the surface and having artificial atmosphere thanks to Graviton actively using his powers. Once there, with the Avengers jailed and watched by mercenaries, Graviton gloated over his victory and tried to seduce Tigra while Halflife hugged Quantum's muscular arm. Halflife then, on the defensive, justified the Forces' initial failure, but Graviton was happy with her. He then explained his origin story, but Halflife started wondering on the value of the alliance, believing she could not trust Graviton or Quantum (whose language she could not understand). Graviton then led his partners to a throne chamber to discuss next steps and during the meeting, he intercepted an SOS that the Avengers tried to send. After the meeting, Halflife went to meditate while Quantum went to get some fresh air on the border of the lair.[6]

Tigra escaped her cell by recovering her human form donned one of Graviton's mercenaries' uniform and interrupted Halflife's concentration to trick her into beleiving that Quantum was bent on killing Halflife, Tigra then lied Quantum in the same way, hoping to prompt the villains to fight each other. Halflife insulted Quantum and tried to touch him, but he dodged and used his powers to replicate himself fifty times[6] apparently - specifically he was only teleporting many times so quickly that he seemed to be in different positions simultaneously[9] Halflife wouldn't let that intimidate her and started touching the assumed duplicates, knowing that any of them would grow old at one touch - but likely due to the nature of Quantum's powers, the other doppelgangers were not affected. The Quanta punching Halflife aged quickly when touching her even that way.[6] This led to a deadlock state where none of the fighters could completely overcome the other.

Seeing the skirmish, Graviton summoned his guards to separate them, thus reducing the Avenger's watch. Tigra took care of the remaining wardens and release the Avengers, who ran to the duel.Meanwhile, Graviton himself tried to stop the conflict himself, producing an interaction of very unified forces coming from their respective powers. This clash of forces build up an unstable situation that eventually escaped Graviton's control.Before the Avengers could intervene, Quantum was repulsed, catapulted away from the rock. At the same time, Halflife was rendered unconscious and seemingly turned into vapour.Graviton's powers also failed and his headquarters quickly raised, moving away from Earth. Graviton's mercenaries surrendered in exchange of the Avengers evacuating them, which they did while escaping themselves. Proud Graviton, however, refused to capitulate and he remained on his flying island until it flew into space, along with unconcious Halflife.[6]

Although Halflife was apparently no longer a threat, the Avengers noted her known powers and limitations in their files, so that every team member would be familiar with them.[3] During a rainy day, the West Coast Avengers tried to make up a list of ten villains exclusively of their own, and Iron Man pondered whether Halflife and Quantum should count as one or two; he decided that they were not collaborative enough with each other for the latter option.[10]

Some time later, Avenger rookie and Protector of the Universe Quasar was involved on a quest to find an unknown alien menace on Earth; he defined a strategy of checking aliens on Earth and, during this odyssey, he met -and fought- Quantum. Quantum briefly mentioned him his past alliance with Halflife.[8]

Halflife somehow returned to Earth and inconspicuously started searching for a Kree experimental device known as the Psyche-Magnetron in the New Mexico desert. She was found by Quasar, who captured her with his matter-energy construct restraints. Thus lassoed, Halflife was dragged through the air by flying Quasar. Halflife used her atomic decay powers to break Quasar's constructs. Seeing that Halflife could destroy any other shape his powers could build, Quasar looked for an alternative and deduced that Halflife's clothes were probably immune to her powers. He then used Halflife's own boots to tie her and carry her to The Vault, a prison for superpowered criminals where armored Guardsmen were her wardens. Quasar intended to have Halflife prosecuted for suspected homicide.[3]

While imprisoned in an energy sphere in the Vault, she was met by Sidewinder who had broken into the Vault in an attempt to rescue King Cobra. He asked her for directions, which she promised if she was freed. Sidewinder, suspected this was a trick and he fled when a Guardsman arrived.[11]

A precarious partner at best, Halflife is openly aggressive toward any individual self-identified with life or life-preserving forces,[6] and also toward noisy beings because she enjoys serenity and stillness.[7] She xenophobically despises beings of other species.[6]

To use this power, Halflife must touch a victim and likely she must consciously activate the power, but people attacking Halflife with their punches will be affected by the power on that contact moment.The power can go through clothes and even high-technology armor but it cannot go through force fields, nor it can affect living artificial constructs or inorganic beings such as energy-made people like Wonder Man.[7][6]

If Halflife is knocked down unconscious, any aged victims who are not already dead instantly recover their normal age and health.[2][4][7]

Halflife has contemplative talents. She claims to speak several languages, with Dakkamite not included in that list.[6]

Halflife apparently has the strength level of an Earthling human woman of her height, weight and build who regularly engages in moderate physical exercise.[2]

Halflife's weak force powers do not interact well with powers based on other fundamental forces: When confronting Quantum's strong force-based powers, they ended in a deadlock. When the fray was joined by a third fundamental force, Graviton, the interaction built up until it became intractable, with Halflife and Graviton temporarily losing control of their powers and Halflife also knocked down.[6]

Halflife's alien clothing is immune to her powers.[4][3]

Through means unknown,[2] Halflife can travel to different worlds, such as going from her birthworld to Earth[7] or returning to Earth[3] after having been expelled on Graviton's headquarters.[6]

Like this? Let us know!
Retrieved from "https://marvel.fandom.com/wiki/Banca_Rech_(Earth-616)?oldid=5873957"
Community content is available under CC-BY-SA unless otherwise noted.