Band of the Bland 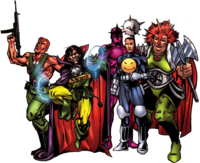 The Band of the Bland were a group of mundane, derivative, stereotypical wannabe super-villains that no one had ever heard of. Dr. Angst summoned the group together in Central Park because he claimed that they shared one common thing, none of them had ever had an original thought in their lives. He stated that he wanted the group to band together to make a name for themselves, but in actuality he had been hired by an unknown party to kill then-presidential candidate Howard the Duck. Before seeking out and attacking Howard, Angst gave the group Mettle Spheres created from a mystical element called Promethium that was supposed to enhance their powers. As it turned out, Promethium is actually a mystical placebo that actually has no real effect on its user. Nonetheless, the group, now believing that they were stronger than ever, attacked Doctor Strange's Sanctum Sanctorum, where Howard was conversing with the Defenders. Howard and the Defenders soon defeated the Band, and they were presumably sent to prison.[1]

Years later, Angst escaped from prison and tracked down the other members of the Band of the Bland who had all been released earlier and had gone their own separate ways, creating unspectacular lives for themselves. Angst reformed the Band to put a new mystical plot into motion. This plot became known as the Cosmic Squish Principle, essentially this would release a multitude of compacted universes which would eventually squish their own Earth dimension out of existence.[2] Angst created five loci points amidst all of the pocket universes, and out of these he planned to create a new universe, the Insipiverse, which the Band would be the rulers of.[3] This plot was opposed by the She-Hulk, her secretary Louise Mason, 1940s vigilante The Terror, a member of an offshoot of the Watchers race known as the Critic, Brent Wilcox and the Band's old enemy, Howard the Duck. This group caused Black Hole to suck up all of the pocket universes using his power and the Critic forced him to hold them all within him. Black Hole somehow later ended up in Ravencroft mental institution, but the fate of the rest of the Band remains unrevealed.[4]

Retrieved from "https://marvel.fandom.com/wiki/Band_of_the_Bland_(Earth-616)?oldid=5544815"
Community content is available under CC-BY-SA unless otherwise noted.