The Banner Brain Omnicompetence Examiner, or Banner B.O.X., is a device created by Bruce Banner at an unknown period of time. After Bruce's death, it ended up in the possession of his friend, Amadeus Cho,[1] who decided to use it to test the intellect of Lunella Lafayette. She quickly became the first person to ever solve it,[2] something not even Bruce Banner, its inventor, could do, as it was intentionally intended to be unsolvable.[3] Cho declared Lunella the smartest person in the world,[2] an assertion verified by Rockefeller University.[3]

The Banner B.O.X. resembles a video game controller. It projects a 3D holographic cubic image with cut-away corners made of many blocks resembling those in the game Tetris.[2] 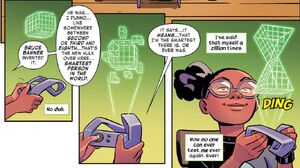 The Banner B.O.X. is capable of testing someone's intellectual aptitude. The test subject moves the blocks around using the controls and reassembles them into a shape resembling an hourglass. The subject's intelligence is determined by how well he or she makes the shape and how quickly he or she accomplishes that task. Lunella Lafayette is so far the only one known to have fully completed the test, because it was deliberately designed to be impossible to accomplish.[3]

Retrieved from "https://marvel.fandom.com/wiki/Banner_Brain_Omnicompetence_Examiner?oldid=4052828"
Community content is available under CC-BY-SA unless otherwise noted.