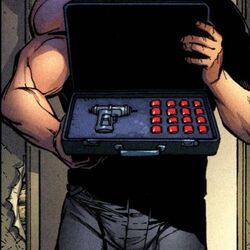 On Earth-1610, Banshee is a power-enhancing drug. It is comprised of Fentanyl, Mutant Growth Hormone, Testosterone, and Dopamine. Sold on the street to give temporary powers to normal people, it can enhance a Mutant's powers to "god-like" levels, bringing about secondary, even tertiary mutations. The drug was originally conceived by Charles Xavier and Erik Lensherr.[1] Wolverine describes it as "liquid nightmare", saying it is both addictive and lethal causing a spike in greater mental and emotional instability. Possibly since the 90s, Colossus has been using Banshee to give him super strength.[2]

After Logan was accused of dosing on it, he went to Peter Parker who was able to determine that Banshee drug actually came from Wolverine's DNA with just a microscope.[3]

This drug was used by Alpha Flight to capture Northstar and take down the X-Men. Wolverine managed to snag a sample from Vindicator.

When Jean Grey found out Colossus was using the drug she had him expelled. But Colossus had gathered his own team of X-Men using the drug, composed of Rogue, Angel, Dazzler and Nightcrawler. Colossus then bought twelve more vials for the job.[4] It has given Cyclops superhuman strength, superhuman hearing, flight, and voluntary control of his eye beams. Rogue also demonstrated complete, voluntary control of her powers. Nightcrawler was able to remove a wall by teleporting as well as teleport Sasquatch's arm off her body. Angel had a physical metamorphosis into a humanoid eagle. The drug also seemed to give humans abilities as Moira developed a sonic scream.[5]

Retrieved from "https://marvel.fandom.com/wiki/Banshee_(Mutant_Growth_Hormone)?oldid=5873126"
Community content is available under CC-BY-SA unless otherwise noted.