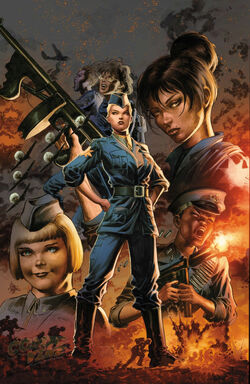 Base of Operations
Hala Base, Hala Field, Battleworld, Earth-15513
Affiliations

The Banshee Squadron was a division of air force dedicated to defending the domain of Hala Field. Its leader is Captain Marvel.

Some of Banshee Squadron's members began to doubt God-Emperor Doom, specifically what lied beyond Battleworld, an area called the Void. This doubt started to affect Captain Marvel as well. One day, Jacquelin Cochran, the Baroness of Hala Field, ordered the Banshee Squadron to destroy an incoming ship, supposedly full of Ultrons. Before attacking the ship, Captain Marvel became curious and entered it to see if Ultrons really were inside. Instead, she found a man on board. She was unable to stop the attack, but she was successful in saving that the man, who became the sole survivor of his crew.[1]

Marvel brought the man to the Banshee Squadron Barracks to recoup. He later identified himself as Jim Rhodes, an inhabitant of the domain of Limbo, who escaped from it with his crew after doubting Doom. Marvel's doubts about Doom and what lied beyond Battleworld grew even more. Determined to see what was like, Marvel and her crew Carol and her crew spent the next several days customizing their aircraft to allow them to travel beyond Battleworld's sky. However, something went wrong when one member of the Banshee Squadron, Helen Cobb, went to test her aircraft on her own, and the aircraft exploded.[2]

Retrieved from "https://marvel.fandom.com/wiki/Banshee_Squadron_(Earth-31333)?oldid=5544820"
Community content is available under CC-BY-SA unless otherwise noted.