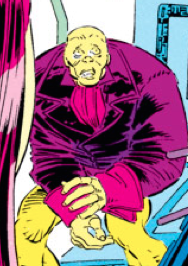 The full origin and history of Bantam remains unrevealed, including the details on how he met and became affiliated with the criminal Trevor Fitzroy.

When Fitzroy escaped imprisonment in this alternate future, he used Bantam to escape through a time portal into the present day. The portal also brought dozens of fellow escaped inmates. Members of the XSE, notably the mutant Bishop, also went through the portal and attempted to capture them all. Fitzroy escaped capture from Bishop, and Bantam remained as Fitroy's lackey as Fitzroy undertook several other schemes of villainy.[1]

Later, Bantam accompanied Fitzroy into an alternate reality, where the villain took on the name of the Chronomancer. Eventually, Bantam realized that Fitzroy had become insane and betrayed his master to Bishop, who had since become trapped in the same alternate reality. Discovering his traitorous actions, Bantam was killed by Fitzroy's soldiers.[2]

Like this? Let us know!
Retrieved from "https://marvel.fandom.com/wiki/Bantam_(Earth-1191)?oldid=4536742"
Community content is available under CC-BY-SA unless otherwise noted.