For the magical location appearing primarily in Doctor Strange comics, see: Bar With No Doors
Bar with No Name 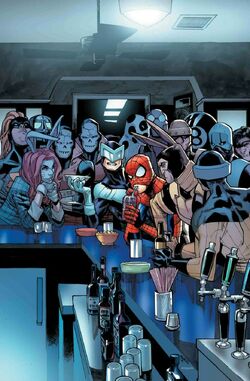 There are multiple Bars with No Name. The one in Medina County, Ohio is where Firebrand held a meeting with other villains to decide what to do about Scourge of the Underworld. Unfortunately, Scourge was disguised as the bartender and ended up killing them all. Water Wizard arrived late due to a flat tire on his car. When he discovered the bodies, he quickly called in Captain America and told him what happened.[1]

Another one is located in New York City, New York. Its location moves around the city from time to time, with each current address being passed around by word of mouth.[2]

Stilt-Man's funeral was held in the Bar With No Name, where Spider-Man and Puma got Prowler out of before the Punisher bombed the building.[3]

The New York bar was later brought down through a joint operation by Spider-Man and Daredevil. Though some of the patrons escaped during the battle, the NYPD led by Captain Watanabe arrived and arrested Deke on the grounds that he did not have a license to legally serve liquor, which also enabled them to shut the bar down.[5]

The Bar eventually reopened and was visited by Electro. When most of the patrons like those who worked for Hobgoblin started mocking Electro, Deke broke up the discussion before they made things worse.[6]

During one of the Bar with No Name's trivia nights hosted by Answer, Boomerang took his roomate Peter Parker to exploit his knowledge on Spider-Man, not being aware that Peter was Spider-Man himself. Around this time, Boomerang had managed to get in the Kingpin's bad graces, prompting him to put out a bounty for his head. Despite the Bar with No Name's rule against in-fighting, all the patrons turned against Boomerang and Peter.[7] In the subsequent scuffle, the bar was destroyed in an explosion.[8]

Due to Manhattan's real estate prices, the Bar with No Name was forced to set up in a beer tent at the Queens Night Market, and this location became dubbed the "Pop-Up with No Name."[9]

Conan and Juggernaut later paid a visit to the Bar with No Name following a mission to obtain the second Eye of Agamotto from Sadurang. Conan was seen standing over Gorilla-Man's body after being beaten by him and also had Nekra and Nightshade around his arm.[10]

When Mayor Wilson Fisk is persuaded by Iron Man to enlist some villains to help defend New York City from Knull's forces, he pays a visit to the Bar with No Name to look for some recruits.[11]

The following villains have been patrons of the Bar with No Name in it different appearances:

Like this? Let us know!
Retrieved from "https://marvel.fandom.com/wiki/Bar_with_No_Name?oldid=6540034"
Community content is available under CC-BY-SA unless otherwise noted.