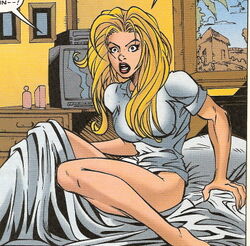 The Valkyrie is vanquished-- and, I, Barbara Norriss, live again!

Barbara Norris was born Barbara Denton to Alvin and Celestia Denton, at a young age her family established a summer home in Cobblers Roost, Vermont. In her teen years, she met her future husband Jack Norriss there and the two soon started a relationship. Barbara's mother was later killed in a car accident, however, unknown to all, her mother made a pact with the Undying Ones to formulate a complex plot offering up her daughter to them in order to regain her youth.[1]

Shortly after they were married, Barbara and Jack joined a cult worshiping the Undying Ones led by a cult leader named Van Nyborg (unaware that they were manipulated into joining the cult by her mother) and were devoted to returning the Undying Ones to Earth. On the night they were to perform the ceremony to bring the Undying Ones to Earth, news of the Hulk being in the area prompted Van Nyborg to have the unconscious body of Bruce Banner brought to their headquarters in order to exploit the Hulk's strength to battle the guardian between Earth and the Undying One's dimension, a being known as the Nightcrawler. When Barbara began to have second thoughts and wished to save the Hulk, the cultists threw her into the dimension with the Hulk.[2]

There Barbara witnessed the Hulk battle the Nightcrawler and their battle destroyed the Nightcrawler's Dark Dimension between both worlds, taking their fight to the Undying Ones. There they met Dr. Strange who aided him in his fight, and Barbara sacrificed her own freedom to act as a guardian to protect Earth from the Undying Ones allowing the Hulk and Dr. Strange to escape.[2]

Barbara remained in the Dark Dimension for some time, and when Dr. Strange and the Hulk returned to that realm once more to fight the Undying Ones, now part of a group called The Defenders they found that the Undying One's leader, the Nameless One, had forced her to mate with the creature, merging them together. The Defenders freed Barbara and returned her to Earth but the entire experience had driven her mad.[3]

The Defenders were then drawn to a mystical world where they were posed against its queen Casiolena with the Black Knight and the Enchantress. During the fight, the Enchantress transformed Barbara into a warrior who called herself the Valkyrie. At that time, the Valkyrie's true nature was not known and it was believed that her persona had been created by the Enchantress. While Brunnhilde's spirit occupied and controlled Barbara's body, Barbara's soul slept, submerged within her own body.[4] Valkyrie had many adventures in Barbara's body.[5]

Barbara's soul remained dormant within her body even as Valkyrie eventually began to remember that she was Brunnhilde, the leader of the Valkyrior, and that she had existed prior to being "created" by the Enchantress. Later, after Valkyrie had been summoned to Valhalla to help battle Ollerus and Casiolena who were vying for control over Valhalla by usurping its (then) leader Hela, she was manipulated into discovering Brunnhilde's original godly form lying insensate within Ollerus' fortress. As soon as Valkyrie touched that body, Barbara's soul was removed from her mortal form and placed within Brunnhilde's godly form while Brunnhilde was left unconscious within Barbara's mortal body.[6] After their costumes were switched, Brunnhilde remained trapped within the fortress while Barbara Norriss (posing as Valkyrie) was sent to the real world to recruit the Defenders into Ollerus' army. The plan was ultimately foiled when the real Valkyrie escaped, joined her comrades and helped Hela's forces to defeat Ollerus. For her part in Ollerus' plan, Barbara was banished to Niffleheim as punishment.[7]

When Valkyrie was slain in Barbara's body her soul was transferred into her sword Dragonfang, and soon the Enchantress manipulated the Defenders into searching for the Rose of Purity so that she might use it to win the affections of the embodiment of Love. To get the Defenders to do so, the Enchantress promised to restore Valkyrie to her original body, an act that would send Barbara's soul into limbo. However, Love ultimately chose to return to the cosmos and took Barbara's soul with him to put her soul to rest.[8]

Since then, another woman named Barbara Norriss has surfaced who bears a striking resemblance to the previous. She was driven to despair by D'Spayre and committed suicide, and her life was briefly assumed once more by Valkyrie. If this Barbara Norriss is indeed the original, the reasons for her resurrection remain unrevealed, however one could speculate that she was restored to life either by Love or by Odin.[9]

Prior to her involvement with the Van Nyborg cult, Barbara had the average strength of a woman her age. When she was merged with the Nameless One, it is presumable that she shared the creatures abilities.

When her body was inhabited by Valkyrie, it was given enhanced strength, endurance, and durability, however, it was not as strong as that of an Asgardian.

When Barbara possessed the body of Valkyrie, she had all the strengths and abilities of a member of the Asgardian race.

When fighting in Valkyrie's body, Barbara has ample fighting abilities to wage combat in Ollerus' army.

Barbara's body had enhanced strength when inhabited by the soul of Brunnhilde, allowing her to lift cars and smash through stone buildings. When she was in the body of Valkyrie, she had the strength of an Asgardian woman of her strength and build.

After her experience with the Undying Ones, Barbara was driven insane and was incapable of functioning in life. Her sanity was partially restored when she was manipulated by Ollerus, and her sanity was eventually restored by Love.

When she inhabited the body of Valkyrie, Barbara had access to Ollerus' arsenal which consisted of many melee weapons of Asgardian origin.

For a time Barbara usurped control of Valkyrie's horse Aragorn.

Like this? Let us know!
Retrieved from "https://marvel.fandom.com/wiki/Barbara_Denton_(Earth-616)?oldid=6423768"
Community content is available under CC-BY-SA unless otherwise noted.