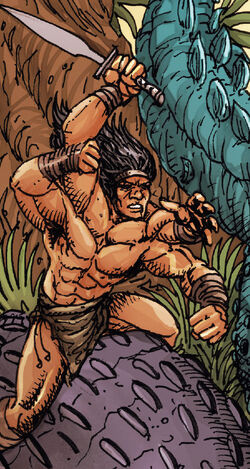 Barbarus was once a Swamp Man of the Savage Land. He became one of the Savage Land Mutates created by Magneto, the master of magnetism, and served in that group. Magneto sent them to battle Ka-Zar and the X-Men, but they were defeated and Magneto's machines destroyed, causing the Mutates to revert briefly to their original states.[1]

However, the lasting effects of Magneto's technology ensure the Mutates regain their superhuman abilities should they ever lose them. Renaming themselves the Beast Brood, the restored Mutates captured scientists in hopes of forcing them to mutate other Savage Land natives into superhumans, but were defeated by the Avengers and delivered to legal authorities in Chile.[2]

The Mutates eventually escaped and returned home, where one of the Mutates, Brainchild, became their leader. Under his direction, the Mutates clashed with the Angel and Spider-Man, who were searching for Karl Lykos, the human alter ego of the pterodactyl-like mutate Sauron. Captured and mutated by Brainchild's transformer device, the heroes were freed by Lykos and Ka-Zar. During the clash, the transformer was destroyed and Lykos transformed into Sauron once more after draining the mutated heroes' energy, restoring them to normal. Assuming control of the Mutates, Sauron pitted them against the X-Men, but they were again defeated and reverted to their original forms.[3]

Regaining their powers, the Mutates came under the leadership of Savage Land priestess Zaladane, who led the Mutates in raiding Antarctic research stations, plundering Chilean cities, and kidnapping scientists in an effort to cement her seat of power in Savage Land. Zaladane then dispatched the Mutates to kidnap the former X-Man Polaris, leading to another defeat by the X-Men.[4]

Barbarus later romanced his fellow Mutate Whiteout before the Mutates encountered their former master, Magneto, who easily defeated them and killed Zaladane.[5]

Led by Sauron was reduced to a primitive state. Barbarus then briefly took over leadership of the group before Brainchild again assumed authority.[6][7]

When the X-Men were helping the reptilian Saurids return to the Savage Land, the Mutates opposed them but were again defeated and turned over to the Land's United Tribes.[8]

Later, Barbarus and the Mutates became involved in an attempt by the reptilian Hauk'ka to restructure and Earth's biosphere. Joining forces with the United Tribes, Ka-Zar, and the X-Men, the Mutates helped defeat the Hauk'ka, though they attempted to betray the alliance at the last minute and were captured.[9]

Barbarus was subsequently incarcerated in the maximum security superhuman prison the Raft, and was among those inmates released by Electro as a cover for Sauron's escape. Returning to the Savage Land, Sauron and the Mutates then worked with a rogue S.H.I.E.L.D. faction illegally stockpiling Vibranium, but were opposed by Wolverine and the New Avengers.[10]

In another plot, Barbarus and the Mutates took control of Magneto's former citadel and planned to disrupt the world's electrical network to expand the prehistoric environment of the Savage Land. The plot was stopped by Cable, Deadpool, Ka-Zar, and others. Barbarus was ordered by Brainchild to stop Ka-Zar, but he chose to escape on a pterodactyl along with Amphibius.[12]

When Roxxon and a team of hired criminals invaded the Savage Land, Barbarus and the Mutates joined forces with Ka-Zar to force Roxxon and his mercenaries out.[13]

After Amphibius sensed that Magneto's former base Asteroid M had returned, the Mutate Worm brainwashed a small group of Mutate, including Barbarus, and had them steal a boat so they could travel to Asteroid M under the mistaken belief that Magneto had raised it. After attacking a Japanese military vessel, the Mutates got into a fight with the New Mutants. Barbarus did battle with Sunspot, putting him a wrestling hold. Worm was eventually defeated and learned that Asteroid M had been salvaged by the X-Men and had been turned into their base of Utopia. After that, Worm and his followers were forced to return to the Savage Land.[14]

Multiple Arms/Superhuman Strength: Barbarus possesses four arms that are all superhumanly strong. While using all of them, he is capable of lifting about 30 tons.

Superhuman Stamina: Barbarus' musculature produces much less fatigue toxins during physical activity than ordinary humans. He can exert himself at peak capacity for several hours before fatigue impairs him.

Superhuman Durability: Barbarus' body is physically tougher and somewhat more resistant to injury than the body of an ordinary human. While not invulnerable, he can withstand impacts that would severely injure or kill an ordinary human with only mild inconvenience.

Barbarus is a formidable hand to hand combatant, preferring street fighting techniques that allow him to make full use of his strength.

Like this? Let us know!
Retrieved from "https://marvel.fandom.com/wiki/Barbarus_(Earth-616)?oldid=6486031"
Community content is available under CC-BY-SA unless otherwise noted.