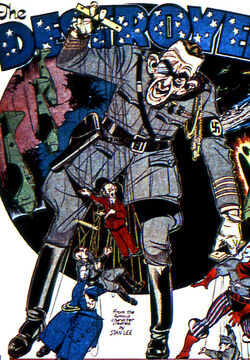 Baron Uhh was a Nazi soldier active during World War II. By 1942 he was a high ranking officer when many of the public speeches being given by Adolf Hitler were being interrupted by a pirate radio show called the Freedom Station who were also working with the Destroyer.

Furious at these dissident activities, Hitler would assign Baron Uhh to track down and destroy the Freedom Station. Using a tracking device, Baron Uhh and a contingent of Nazi soldiers managed to track down the secret hideout of the Freedom Station. They were soundly defeated by the Destroyer who easily fought them all off while the producers of the pirate radio station made their escape. Deciding to get the public to help, Uhh put out a reward of a million Marks[1] to any information leading to the capture of the Destroyer.

This caused Baron Uhh to learn of Florence von Banger's connection to the Destroyer and he would have her captured. Attempting to torture her, Florence refused to reveal any secrets. Eventually the Destroyer was captured, but the hero would break free and rescue Florence before either one could be tortured. Baron Uhh would have a flaming hot swastika shaped branding iron placed on his buttocks and knocked out by the Destroyer for his troubles. [2]

His fate following this failure is unrecorded.

Baron Uhh used a branding iron shaped like a swastika to torture his foes.

Like this? Let us know!
Retrieved from "https://marvel.fandom.com/wiki/Baron_Uhh_(Earth-616)?oldid=4404002"
Community content is available under CC-BY-SA unless otherwise noted.