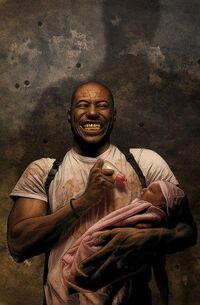 After busting a local cocaine supplier, the Punisher finds a naked, abused man who begs him for protection above what the police can offer him from people who are trying to kill him. He leaves him to the cops, but changes his mind and breaks him out when he sees corrupt cop Billy LaCarda at the same precinct house the man was taken to. The man, Si Stephens, explains to the Punisher that until recently he was involved in a plan with his bosses to soon blackout parts of Florida to raise the stock price of their company, Dynaco, which is why they are trying to kill them. The Punisher, fearful of what could happen in Florida if the blackout plan goes into effect, decides to stop it before it happens--which he figures will be easy considering he's dealing with CEOs.

The man in charge of Dynaco, Harry Ebbing, had no idea his underling, Dermot Leary, authorized a drug dealer to kill Stephens, but in order to keep the secret calls in LaCarda to do it. When LaCarda reports back that the Punisher has taken Stephens, Ebbing calls in a "big gun" to fight a "big gun", Barracuda.

The Punisher flies to Florida, where he and Barracuda have a massive battle which results in the latter losing four fingers and an eye, but the former losing the battle and being thrown to sharks, which he manages to escape. While the Punisher is recovering from the fight, Barracuda does reconnaissance work on Leary for Ebbing, finding out he's sleeping with his bosses wife and that they're planning to sell him and his blackout plan out to the press, which he decides to go along with for the bigger paycheck.

Before a shareholder pleasure cruise, which Ebbing had a designed helicopter delayed arrival for, the Punisher sets two explosives on the boat. The large one is found before it's detonated, but he sets off the smaller one, which allows him to demand Ebbing and Barracuda turn themselves in over the radio. Unknown to him, Ebbing jumped from his helicopter after the press got wind of his blackout plan and his wife made him aware she was sleeping with his protege, and they'd attacked Barracuda and tossed him from the boat. An angry Barracuda resurfaces, resets the disarmed explosive, and lets the Punisher know, allowing him to destroy the entire boat, leaving everyone in shark infested water. He tries to climb aboard the boat the Punisher is on, but is shot point blank with a shotgun and left to die.

Retrieved from "https://marvel.fandom.com/wiki/Barracuda_(story_arc)?oldid=4281305"
Community content is available under CC-BY-SA unless otherwise noted.