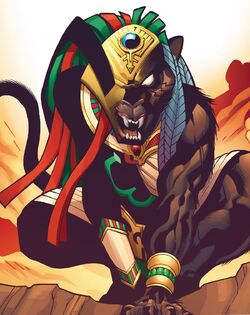 In Necropolis. The Wakandan City of the dead...where Black Panthers go to die. And where you will rule. As king of the dead. Every Panther that has ever lived, their strength, their knowledge is now yours. Every battle fought...every battle won. Unbeaten. Unbroken. A crown of the unconquered. A king of kings. My champion. My Black Panther.

Bast is one the eldest of the Ennead, the child of Ra himself,[1] though by her own admission she and her fellow deities were originally mortal beings who apotheosized to divinity through being worshiped.[12]

As early as 10,000 BC Bast was worshiped as a god, granting power to worshipers and descendants. The Children of Bast dwelled in the mountaintop city Bastet, existing as panthers but becoming human via the magical Eye of Bast gem until it's theft.[4][2][verification needed]

The Cat-Goddess was possibly another aspect of Bast during the Hyborian Age.
Its idol was found by Conan during the time he was with the Zuagirs, and its power led to the mutiny of Fazal who briefly led the Zuagir host in a senseless and suicidal assault on a fortress before being killed by Conan, who rejected the idol and its promises.[13]

10,000 years ago in what would one day be known as Wakanda was home to a collection of primitive human tribes. It was during this time a massive meteorite made of a sound and energy-absorbing mineral, which would later be known as vibranium crashed to Earth. One of the tribes, led by Bashenga, its mightiest warrior, decided to investigate, believing this to be a gift from the gods. When they reached the crater, they found that the material vibrated and decided it would be useful to forge into weapons. However, the radiation the meteorite gave off also had a side effect, turning some of the tribesmen into "Demon Spirits". Bashenga prayed to the "Panther God" to give him the strength to defeat these demons, becoming her avatar and the first "Black Panther" since prehistoric times and uniting the tribes to form the nation of Wakanda. His lineage would later rule the country for centuries.[14]

Alongside Thoth, Kokou, Mujaji, Ptah, and Nyami, Bast is a member of the pantheon of Wakanda, known as Orisha. The humans and the Orisha defeated the Originators and banished them to the Nether-Realms beyond a group of gates. As part of their duty, the Orisha became guardians of these gates.[15]

As the pharaoh's took rule over Egypt, many gods moved to Celestial Heliopolis,[16] while Bast adopted a realm bordering Celestial Heliopolis and Ala (home of Africa's gods, the Orishas),[3] the Spirit World.[17] Bast inherited Ra's life-giving solar heat, while his sibling Sekhmet inherited his fiery, destructive fury; both siblings had male and female forms. In Egypt, Bast was worshiped primarily in the city of Bubastis[1] as a goddess of pleasure, dancing, and music and it became a pious custom to bury mummified cats within Bast's sanctuaries. Bast protected men against diseases and evil spirits.[citation needed] The goddess received greater regard in 952 BC when Pharaoh Sheshonk elevated Bubastis to prominence within a kingdom.[18]

An unidentified sorcerer created the Claw of Bast, a powerful artifact using Bast's power to restore the sick or dead while also empowering its wielder. It was employed seven times before Egyptian leader Khafre had it broken into fragments in 2,500 BC.[18]

During World War II; Wakanda was attacked by Col. Fritz Klaue. The then chieftain, Chanda, escaped into the jungle and consumed the Heart-Shaped Herb. In a vision, he spoke to the Panther God, but as he recovered, he was attacked by an actual panther. Luckily, Chanda was able to kill it and then wore its skin as a symbol of intimidation in order to defeat the invader.[19]

The Claw of Bast was reassembled in the twentieth century by Reed Richards, Francesca Fisher, and Victor von Doom, but it crumbled after being used to defeat the Sphinx and heal Reed's ailing mentor, Professor van Nuys.

After the death of T'Chaka the next in line to the throne, T'Challa, defeated his uncle S'Yan the current Black Panther and took a Heart-Shaped Herb to link him to Bast, the Panther God, which also enhanced him thereby making him almost superhuman as T'Challa became the new Black Panther, leader of the Panther Clan, and King of Wakanda.[20]

Bast later blessed a man from the African nation of Azania with the powers of the Panther God. T'Challa, in turn, lost his powers and was forced to confront the panther man. He revealed that Bast took T'Challa's powers away as he had not helped the people of Azania. The two battled in the Techno Organic Jungle and he was able to use one of his traps to restrain him as he returned to normal. Bast then confronted T'Challa by knocking him aside. When T'Challa finally admitted he had not done enough and would dedicate his time to help the people, Bast returned his powers while telling him he had passed the test.[5]

Bast came to T'Challa's aid when the demon Mephisto attempted to buy his soul in exchange for the lives of the people of Wakanda. He agreed but it was a trick as Mephisto was transported to Bast's realm where he was overwhelmed by the souls that were connected to the "Panther God".[21]

Bast met with T'Challa and his new bride Storm in the spirit realm. She judged her worthy of being the queen of Wakanda.[22]

Psycho-Man created an illusion in Black Panther's mind of the Panther God, but he knew it was a fake and broke free of the trap.[23]

When T'Challa was possessed by the Shadow King, Storm prayed to the Panther God and convinced her to prove to the Wakandan people that Storm was, in fact, the rightful ruler. After she prayed, several Panthers came from around the city, walked through the army, and bowed to Storm. The army then dropped their guns and bowed to their queen.[24]

Following the attack on the life of King T'Challa, the country of Wakanda was thrown into an uproar. Shuri, sister to T’Challa and Princess of the country, had been chosen to prepare for judgment before the Panther God, with the hope that she would be acceptable and worthy to take the mantle of Black Panther. The Panther God found Shuri unworthy of the mantle due to her self-centered sense of entitlement. She was deemed arrogant and jealous of her brother’s accomplishments as the Black Panther. Shuri was dismissed to ponder her future as she would never be allowed to follow in her brother’s footsteps.[25]

Doctor Doom, ruler of Latveria, planned an invasion of Wakanda in order to take the Vibranium so it could aid him in his conquest of the planet. He traveled in spirit form to speak with the Panther God and was able to convince her through many examples and even allowed the god to stare deep within his soul. Bast saw all of his crimes but she also recognized that he only did this for his cause: that the world would be a better place under his rule. Bast agreed and would allow him to take the Vibranium.[11]

Bast heroically sacrificed herself holding off hordes of Japanese demons from Yomi to buy the God Squad enough time to flee the realm of the Japanese deities, during the climax of the Chaos War.[26]

Not long after Rahne Sinclair returned to X-Factor[27] pregnant with Hrimhari's unborn child,[28] Bastet was drawn to New York City along with many other animalistic demons and gods. Her ultimate goal for the child remains unclear, but it seems to not care about attacking and killing others to get to the child.[29]

She-Hulk attended an Egyptian exhibit sponsored by her law firm. She observed a cat statue with a necklace around its neck. The curator explained to her that the statue, a replica of the original, is of the Egyptian goddess Bastet and offered to let her try on a replica of the necklace. As he puts it on her, she sees the cloaked women and follows them into a storage room. Spider-Man, who was also at the exhibit, teamed up with Jennifer to stop the women, who are trying to steal the original cat statue. They made quick work of them and handed them over to security personnel. When She-Hulk goes to check on the statue, its eyes begin to glow green and speaks to her. After handing the statue over to Spider-Man, She-Hulk goes to talk to the curator, but Spider-Man was shocked to see that she has suddenly grown a cat tail, which she told him not to make any jokes about. Wanting answers, She-Hulk went to find the cloaked women, but instead finds that the museum has been overrun by cats. The glass ceiling shatters, so while She-Hulk escorts everyone outside, Spider-Man creates a net to keep the cats from falling on them. The crowd and the cats cause a traffic accident in which a bus flips over. Luckily, She-Hulk caught the bus, but Spider-Man realized that she must take off the necklace to get rid of the cats and takes it off of her, not realizing that it was a replica. Suddenly, all of the cats merge together to form Bastet, the cat goddess, who wants She-Hulk to serve her to protect the world. To get rid of her, Spider-Man puts on a cow mask and pretends to be Sobek, the servant of Neith: Goddess of War and Hunting. Bastet falls for this ruse and agrees to leave.[6]

Bast was later confronted by T'Challa and his second Reed Richards to beg the goddess to return his powers so he can protect his people. She decides against this and allows Shuri to remain as queen of living Wakanda while he would rule the city of Necropolis, the city of the dead. From that day forward, he became a new "Black Panther".[30]

The Intergalactic Empire of Wakanda

While being the chief deity of Wakanda, Bast and the other gods of Wakanda were also worshiped by the Intergalactic Empire of Wakanda, and had made Emperor N'Jadaka her champion. However, N'Jadaka, feeling that Bast had betrayed him after he was nearly left to die, challenged the current avatar of Bast, using his symbiote to kill her and drain Bast of her powers.[12] This left Bast to possess N'Jadaka's daughter, Zenzi, and aided the Maroons in fighting the Empire.[8]

Bast is among the most powerful Heliopolitans when empowered by the sun.[citation needed]

Bast formerly wore the Wedjat, the Eye of Ra.[6]

Like this? Let us know!
Retrieved from "https://marvel.fandom.com/wiki/Bast_(Earth-616)?oldid=6549125"
Community content is available under CC-BY-SA unless otherwise noted.