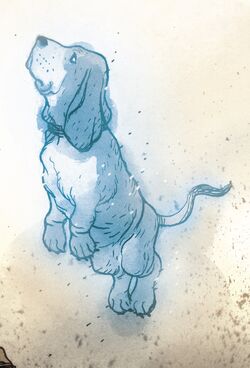 Bats was a basset hound whose original owner of sixteen years suffered a heart attack and left him in a shelter. He was adopted two other times,[1] and was then left under the care of Stephen Strange during the time he had become a veterinarian after being deposed from his title of Sorcerer Supreme. Strange enchanted Bats with a translation spell that allowed people to interpret Bats' barks as English.

When Strange confronted the new Sorcerer Supreme, Loki, he attacked Stephen. Bats tried to intervene, but Loki raised an inoffensive force field to keep him at bay. Bats got agitated, which caused his heart to give out. He died almost immediately, only managing to tell Stephen to never let anyone hurt his friends.[2] Not long afterwards, Stephen travelled to Asgardia in order to empower himself using Yggdrasill. As an offering to the powerful tree, Strange handed it Bats' corpse since he had nothing else.[3]

After Loki and Strange resolved their dispute, and the former relinquished the mantle of Sorcerer Supreme back to Stephen, Loki apologized for Bats' death. He tried to explain that he had searched for a remedy to the situation, but was abruptly teleported away by Strange. Moments later, Bats returned to Stephen in the form of a spectre.[4]

Translation Spell: Thanks to a spell cast by Stephen Strange, people were capable of understanding Bats' barks as if he were speaking English.[2]

Possession: As a ghost, Bats is capable of taking over the bodies of people. He managed to possess Doctor Strange's body when his soul had been temporarily claimed by Mephisto.[5]

Heart Condition: Bats was a very old and sick dog with a weak heart. This led to his death after he got agitated.[2]

Like this? Let us know!
Retrieved from "https://marvel.fandom.com/wiki/Bats_(Earth-616)?oldid=5867715"
Community content is available under CC-BY-SA unless otherwise noted.