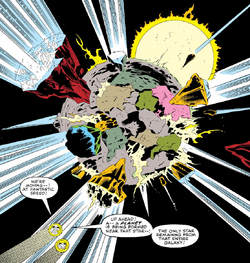 Battleworld was a patchwork planet constructed by the Beyonder, who used pieces taken from hundreds of worlds, including Earth, to create an arena for his "Secret Wars". During this time, Doctor Doom stole the Beyonder's powers. Towards the end of this conflict, the Molecule Man transported the suburb of Denver which had been stolen from Earth back home.[1]

The Thing stayed on Battleworld for a while after most of the Beyonder's kidnap victims had returned home.[2]

Like this? Let us know!
Retrieved from "https://marvel.fandom.com/wiki/Battleworld_(Beyonder)?oldid=6017753"
Community content is available under CC-BY-SA unless otherwise noted.