There was nothing. Followed by everything. Swirling, burning specks of creation that circled life-giving suns. God Doom... created the light. Then there was earth. The firmament cooled and he raised up a land--This holy land--The world--And upon it he set his kingdoms.

Following countless incursions across every reality, the Multiverse was destroyed. Doctor Doom and Doctor Strange were confronting the beings responsible of this, the Beyonders, at the same time as the final incursion was taking place between Earth-616 and Earth-1610.[3]

After having stolen the Beyonders' omnipotent abilities for himself, Doctor Doom was capable of creating an entirely new reality from the remnants of incursion points between collapsing worlds; that new reality was Battleworld.[4] Initially, Battleworld was a chaotic place, locked in eternal night and a constant state of war between the survivors of the salvaged realities. Doom managed to bring order to the world, ordering the remnants of the separate realities into "domains" under his command as the God-Emperor of Battleworld.[5] Some domains consisted of the remains of multiple realities, and were unified due to warfare or mutual agreement. Each domain is ruled by a baron or baroness, appointed with Doom's blessing. The borders of each kingdom are clearly defined, and travel between different domains was discouraged and required special dispensation from the local baron. Unauthorized travel between domains was a crime and would result in intervention by the Thor Corps. The Thor Corps were Battleworld's police force, and were under the direct command of Doom.[2]

As long as the resolute laws of Doom were followed, each baron or baroness had complete control over their province. Disputes between domains were resolved in the court of Castle Doom, before Doctor Doom himself, with Sheriff Stephen Strange acting as prosecutor and judge. Disputes could be resolved amicably or be settled unevenly. One of the sentences for being found guilty was paying restitution, either with gold or territory. The prosecuted could demand a trial of combat against their accuser. If the accuser refused, any charges against the accused must be withdrawn. Doom could also directly decide the fate of whoever he wanted.[2]

Three domains (consisting of the Deadlands, Perfection, and New Xandar) were separated from the rest by a giant wall named the Shield, simply for the fact that all three contained threats that if unleashed would destroy the other domains.[2] The Shield was guarded by exiles from Battleworld who were sent there as penance for prior crimes. Due to the Shield's importance, attacking or damaging the Shield, even if by accident, would also lead to exile. The worst punishment a criminal could accrue on Battleworld was exile beyond the Shield, leaving them at the mercy of the monsters who roamed there.[6]

In Battleworld, Doom was worshipped as a deity. The right hand of the cult of Doom was the Law, and its left hand was the Foundation, focused on discovery and science.[2] Eight years after the creation of Battleworld, its inhabitants no longer had memories of the worlds they lived in before, and believed that they had always lived on Battleworld.[4] While Doom largely allowed events on Battleworld to play themselves out, he intervened on occasion to undo certain events and to alter the fates of those affected, when it suited him. [5]

Battleworld was one of only three celestial bodies in its universe. At some point after the creation of Battleworld, Doom sentenced the rebel Johnny Storm to be punished, but left the penalty to be decided by his sister, Susan. She resolved to lift Johnny into the sky, where he became the Sun. The legend of "the Man in the Sun" has inspired people from certain domains to worship Johnny Storm as a deity.[4] Apart from the Sun, there were no other stars.[7] The third celestial body was Knowhere, considered Battleworld's moon.[8]

The destruction of Battleworld was catalyzed by the arrival of two groups of survivors from the two final universes to perish, Earth-616 and Earth-1610.[4] While the villainous Maximus gathered an army to oppose God Emperor Doom, Mr. Fantastic and the Maker worked together to find Doom's source of power.[5] When Castle Doom was assaulted, Mr. Fantastic and God Emperor Doom engaged in a furious confrontation, that ended when the Molecule Man decided to give Reed Doom's power. Without his powers, Doom could no longer hold Battleworld together, and it quickly collapsed.

The previous multiverse was brought back by Mr. Fantastic with the power taken from Doom.[9] Due to Battleworld's reality having being the epicenter of this multiversal renewal, it became rich in a substance known as Iso-8, a material identified as the byproduct of creation itself.

The remnants of Battleworld were discovered by the Elders of the Universe of the restored Earth-616 after realizing the multiverse had endured a death and a rebirth. They resolved to fight for the possession of the Iso-8, and decided to use the broken shell of this world as the arena for their Contest of Champions, a competition where several individuals, taken from Battleworld and the reborn multiverse, fought to the death on behalf of each Elder. The highest prize was the ISO-Sphere, the concentrated and most powerful form of the Iso-8.

The two last remaining competitors, Baron Maestro of Battleworld's Dystopia and the Punisher of 2099 A.D. began working together against the Elders they represented, the Collector and Grandmaster, respectively. Following a scheme involving setting up a new Contest of Champions with new contestants, the Maestro stole the piece of the ISO-Sphere that belonged to the Grandmaster. The two pieces of the ISO-Sphere desired to become whole again, with only their respective owners' will preventing them from becoming one. Maestro subsequently used his indomitable will to make the Collector's portion of the ISO-Sphere abandon him, and obtained the object in its entirety.

With the power of the entire ISO-Sphere in his hands, Maestro used it to put together the sundered fragments of Battleworld, restoring the planet to its previous form.[10] When the ISO-Sphere was stolen from Maestro by Outlaw, he used its power to banish the villain from Battleworld and teleport the contestants to wherever they wanted to be. As a consequence of wishing the Contest of Champions to end, the ISO-Sphere shattered. A group of the contestants decided to remain in Battleworld, forming the Civil Warriors, in order to guard the Iso-8 and the shards of the ISO-Sphere so they wouldn't fall into the wrong hands.[1] 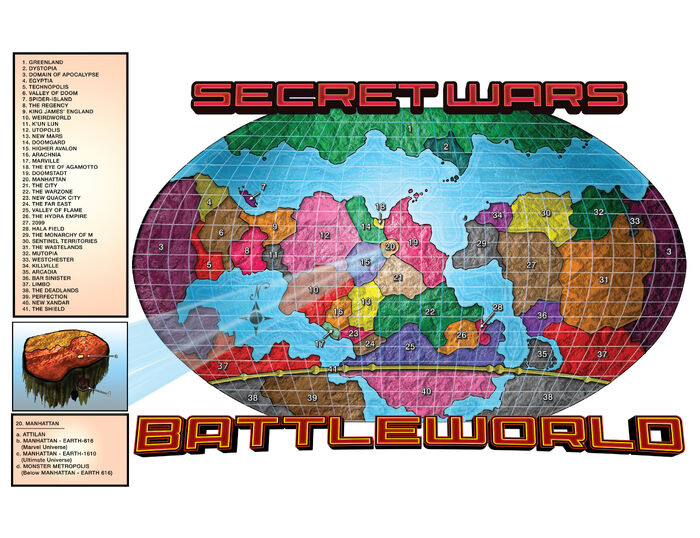 Numbered Domains on the Map

There are 41 domains in Battleworld known, numbered and on the map, with Doomstadt as the capital of the planet:

Other domains unidentified in the Battleworld map include:

For a list of Minor residents of Battleworld, please see: Battleworld (Latverion)/Residents.