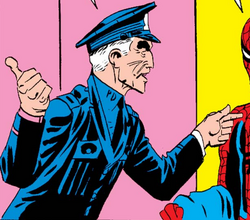 Baxter Bigelow was a security guard working at a TV studio. He tried to stop a burglar from escaping and asked Spider-Man for help to stop the crook, but Spider-Man disregarded him. The same thief would soon after kill Spider-Man's Uncle Ben during a break-in.[1]

Years later, Bigelow worked as a guard for the building which held the offices of the Daily Globe newspaper. While chasing a purse snatcher in the building, he encountered Spider-Man's civilian alter-ego, Peter Parker. Unlike the last time this scenario played out, Peter tackled the crook and turned him over to Bigelow, and was surprised to recognize him.[2]

Like this? Let us know!
Retrieved from "https://marvel.fandom.com/wiki/Baxter_Bigelow_(Earth-616)?oldid=5741386"
Community content is available under CC-BY-SA unless otherwise noted.